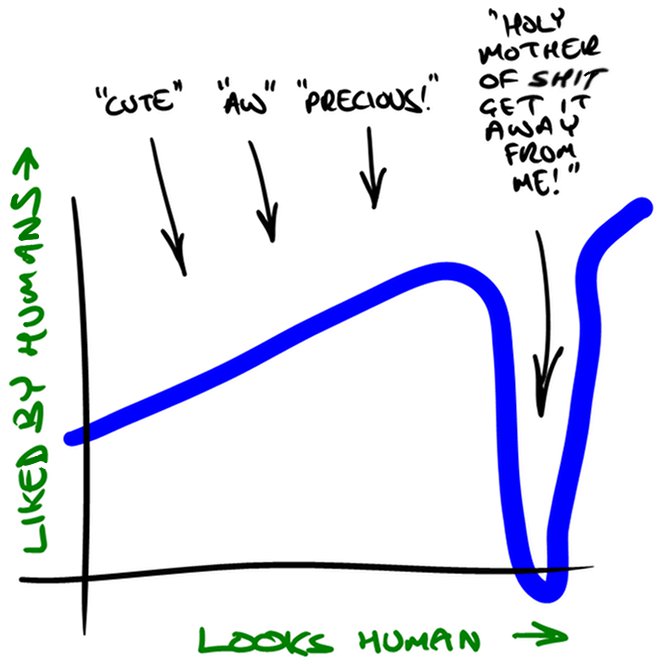 There’s a strange phenomenon, familiar to people at the cutting interface of technology and art, that goes by the name of “the uncanny valley”. As a general rule, the more something looks like a living human, the more humans like it. We like photographs or drawings of humans. We like kittens and monkeys, lively animals with human-like faces, even better.

So naturally in fields like CGI or robot design, people have striven to make their work look more and more like reality. And this is where they hit a strange snag. Because though the relationship between realism and likeability is pretty much a smooth straight graph, as soon as something looks almost, but not quite exactly, like a living human, it suddenly scares the living toothpaste out of us.

It may be because our minds are upset by the category conflict. We like things that seem human, but we aren’t fooled into thinking they really are. When we actually become uncertain, it’s disturbing.

Or perhaps it is simply, if sadly, that instinct tells us something which looks and acts almost but not exactly like a human is a human – but one who is severely diseased and therefore dangerous.

The worst effects occur when something is very human-like in one way but not in another. A robot with very realistic human skin and features for example, but whose movements are unnatural. Or one that moves right, but has an inhuman, skeletal face. These things are as creepy to adults as clowns are to children. So it seems if we ever do have mechanical companions, they will either be friendly, cartoony machines we will never mistake for people, or so damn realistic we wouldn’t know they weren’t without being told.

The computer-animated film Polar Express was said by some to be stuck in Uncanny Valley, the motion-capture technique giving the CGI characters uncomfortably too-natural movements. But today, I came across another example:

That’s right. Baby sloths are really cute, really silly-and-sweet-looking. But the way they move… creeps me the fuck out. See for yourself.

7 replies on “Greetings From Uncanny Valley”

Holy Shit Rich , these are way too freaky !

Hey, makes me think. Wouldn’t you be the coolest witch ever if you had one of these?

Holy Shit Rich , these are way too freaky !

Hey, makes me think. Wouldn’t you be the coolest witch ever if you had one of these?