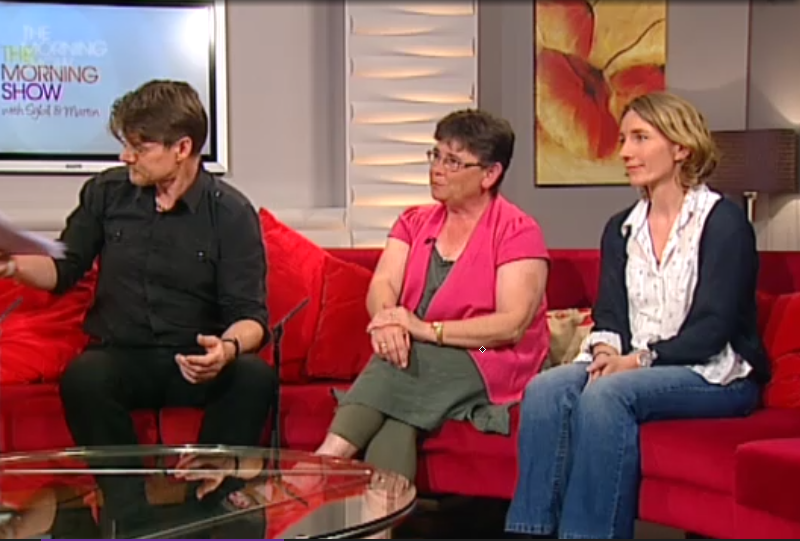 The Ballyhea group was on telly today – TV3’s Morning Show. That’s as close to media glamour as I’ve got in a while. Not that I was on myself – I’d be useless at that kind of thing, cameras tickle. They had the eloquent, informed ones: Diarmuid and Cath and Vicky. Between them they covered the enormous cost of the bank bailout to each and every one of us (€60,000 for the average household if you spread it evenly), how it affects ordinary people, and how the current response to it will be as disastrous for us as similar ‘medicine’ was for the Developing World – a pretty comprehensive encapsulation of the issue. You can watch it here.

Back to our adventures in Germany then. I’ll skip over the details of organising tickets for the bus into town, the tram to the hotel, and the rooms – except to say that Cath did them all, and found the cheapest way to do them all. One of those people every expedition needs.

Settled in, we next needed to reconnoitre. Having dinner seemed like a good way to do that, so we headed in to the older and more attractive part of Frankfurt. It has to be said, it’s not very big. For a major global hub of wealth and power, Frankfurt is surprisingly unimpressive. It has its expensive suburbs of course, but the historical city centre is not much to look at. And while I’m being rude about our hosts, German sounds like English with a wheel missing.

You feel bad about thinking this when you remember that the reason there’s so little left of historical Frankfurt is that it was obliterated in World War II, first by bombing and then by ground combat. Before then, it actually had the largest mediaeval city centre in the world. So we had our dinner in the ruins, essentially. But first we took the photo-opportunity of a statue representing justice to make our point.

After checking out the ECB building and finding it a lot less like Forty Knox than our mental image, we had dinner at the outdoor restaurant you see behind us there – mainly sausages and sauerkraut of course. I am pleased and relieved to be able to report that the frankfurters were the nicest. After, we fell to singing songs – mainly Cork ones like the Banks and Thady Quill. We weren’t drunk or anything, it just seemed appropriate. Eventually though a woman resident brusquely told us we were too loud, the implication being that this was far too classy a neighbourhood for that sort of thing.

To show solidarity with us, a drunk German man at the next table started off a chorus of Molly Malone. Politics was on!

Richard, first, thank you for the lovely complements! It was a pleasure to” look” after you! Next time we meet, soon I hope, can you please give me some tips on how to get any way close to your level of photography? They are wonderful! Cath

Thanks! In all honesty, I’m just learning myself. I spent a long time being a fairly mediocre photographer. (Details here!) Having a decent camera on my phone has been a huge help, because it’s allowed me to take pictures more often and more spontaneously.

One thing I’ve learned is to mentally step back from the picture – try to forget about the details in it that interest you, and see it as a whole of shape and colour. When the image just pleases you, for reasons you can’t put a finger on, that’s the moment to press the shutter.

Another trick is to crop pictures afterwards! You can almost always improve the composition. It helps a lot if you have a smartphone that can do that sort of thing, or a computer.