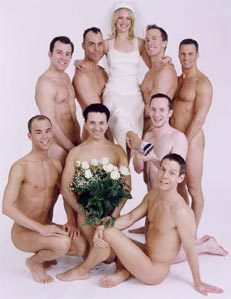 Bridie O’Flaherty¹ warned us last week that a shop which sells vibrators will attract undesirables. Hmmm… Apparently the most frequent purchasers of these things are actually long‑distance lorry drivers – male ones. Not because the job makes them kinky about vibrations, but in the belief that such ‘marital aids’ will help their wives remain faithful to them while they’re on the road.

Interesting that they don’t seem to purchase reciprocal devices (if that’s the phrase I want) for themselves. One can only assume that they find a different method of remaining faithful. Or perhaps Bridie is right, they’re simply undesirable.

This leads neatly back to my campaign against divorce. Last week I pointed out that the whole idea was fundamentally illogical, and the only sane option was polygamy. I should mention here that in practical terms the situation would be little different from divorce, in that separated partners would need nobody’s permission to enter into new marriages. Thus it would be a way to avoid the divisive process of having a referendum, (the constitution doesn’t even mention polygamy), and in principle we’d still have lifelong marriage. Instead of just lifelong alimony.

With polygamy however you wouldn’t necessarily need to be separated in order to marry someone else. Not that the husband, say, could wander in one day with a brand new wife. (‘Darling, meet Darling. Darling, Darling.’). Once two people are married, they both have to agree to any addition to the partnership. Presumably a certain amount of bargaining would occur. She may well insist on an extra husband too. Or something more useful. The point is that all parties have to consent, because they’re all going to be married to each other.

With everyone having a veto like that it’s unlikely that many marriages would end up with more than a handful of members. On the other hand though, with the gradual addition over time of younger partners, a marriage could go on indefinitely. This ‘extended marriage’, being both voluntary and yet binding, would become a far more stable core unit of society than the old extended family ever was. It could be the saviour of social cohesion.

Okay, I could write a book on this new system. Maybe I’ll get into further details at another time; meanwhile, feel free to write to me with any faults you see in the design. I bet you won’t find one though. This is the best of all possible systems. It’ll work.

On a related topic, I was glad to see that in a recent survey, 21% of teenagers claimed to be sexually experienced. That’s very reassuring – when I was that age there’s no way 79% of us would have dared own up to being virgins.

But back to important matters, we have to halt this referendum campaign. You know what the real purpose of putting the conditions for divorce in the constitution is, don’t you? So that individual TDs will be able to say “I didn’t bring in this divorce law. The people did.” In other words it’s a neat trick to avoid accountability in government.

GET THE BOOT IN

Clever swines. And having got away with it once, they’ll soon be using it for every controversial measure that comes along. It’s a recipe for a form of dictatorship. A representative government has to find working compromises, please enough of the people enough of the time. For a referendum you only need 50% plus one to think it’s quite a nice idea, and it doesn’t matter a damn if the other not-quite-half hate it with every fibre of their collective being. What if PAYE payers got up a campaign to constitutionally gas people on social welfare? It could happen.

So in principle I’m against the idea of messing around with the constitution for political ends. But I guess if you can’t beat them, get the boot in first. I propose a referendum: Give the cash of the richest 25% of the population to the rest of us.