Posters are going up. Then blowing down. Then going up again. A lot of them are for independent candidates, which I think is great. Ideally we’d throw out every member of every party and start over with a Dáil full of people who are allowed to think. Though be careful – there are some out there who may appear to be independent but are just printing the words “Fianna Fáil” very, very small. 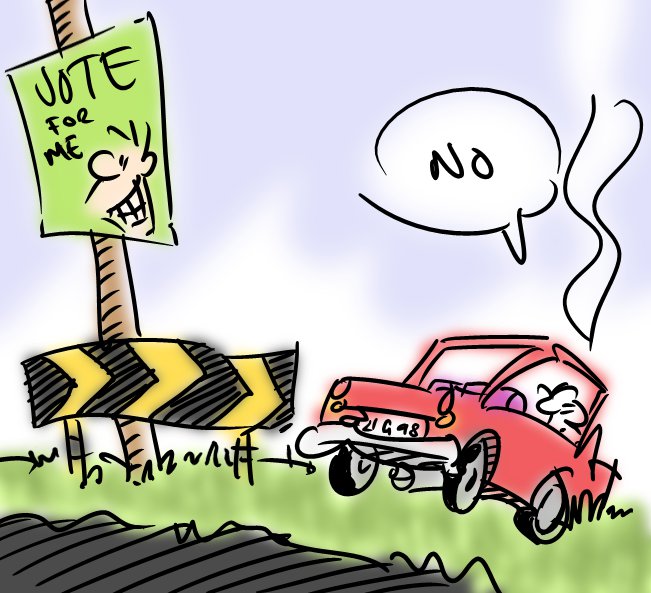 The one I see around here most is Noel Grealish¹. Well technically he’s independent, but being the guy left behind when the party’s over is not what that word usually brings to mind. There are plenty more independent independents out there, and I may vote for them all. Though one did annoy me today by thinking that a good place for a poster was a dangerous bend in the road.² Sure, people do slow down there. But we really shouldn’t be reading.

A couple of years back, shortly after the collapse, a Fianna Fáil woman was picking a fight with me in a wine bar late one night. “But who else is there?” was her refrain. Of course she wanted me to name some other party so she could argue that they were just as bad.³ I wasn’t having that. My answer was “Anyone. Anyone would be better than Fianna Fáil. You. Me. Some stranger off the street. Citizens selected by lottery. Anyone.”

I believed that passionately then, and even more now. Fianna Fáil’s central problem is that they have been in power too much. It leads not only to corruption, but to a different way of thinking. They come to inhabit a different culture – a ruling culture. We see it now in their inability to really grasp how betrayed the country feels.

But who do you actually vote for? The alternatives are, frankly, not terribly inspiring. Well we are blessed in this country with one of the best voting systems in the world. Yes it does have its disadvantages and probably could use some reform – though I certainly wouldn’t blame it for all the failings in our political culture – but while we still have it, we ought to make the best of it.

(For overseas readers: In brief, we vote by numbering the candidates in order of preference. I hope to explain the system better in the next day or so.)

You know who you’re against, but not who you’re for? I can sympathize – but it really doesn’t matter. One thing that makes the system great is that you can effectively vote against a party. If you just put the candidates in random order, leaving out the Fianna Fáil ones, you’ve made it that bit harder for FF to reach a quota.

It is better to have a real order of preference of course. That can become quite a game of skill, but there’s one good move that everyone should know: If you give your “Number One” to a candidate you expect to be elected, you’re virtually throwing it away. Electing someone is the last thing your vote should do. Well, perhaps the second or third last.

There is almost no such thing as a “wasted vote” in the Irish system. Your vote can always end up with an elected candidate if you wish. But once it does, it’s more or less finished. Yes, if a candidate gets more votes than the quota the surplus is distributed, but the actual ballots passed on are chosen randomly so the chances of yours being among them are poor. If your first candidate is eliminated however, your vote always passes on to your next choice. Line them up carefully and it can boost the chances of a whole series of protest or independent candidates before winding up with an elected one.

So you should never, ever not vote for a candidate because you think they have no chance. You lose nothing by trying it, and you might be pleasantly surprised.

2 replies on “So How Should I Vote, Mr. Internet?”

Ooh. I feel uncomfortable even contemplating strategic voting. It’s just too calculating – and, like a Leaving Cert student trying to be too clever with his or her CAO form, it can be dangerous. I remember giving my real first preference candidate my No.2 choice because she was a dead cert. Well, it turned out that thousands of fellow voters felt the same way, and my vote never budged as the weaker candidate hung on to the final elimination and a Dail seat. Never. Again.

You put the one you liked less before the one you really wanted, that is risky. I’m saying to put the candidate(s) you’d really like to win first – even if you think they have no chance. That’s not strategic voting, that’s using the preference system as it was intended. Too many people don’t vote for who they really want for fear of “wasting” their vote on a no-hoper, but our system is actually designed to prevent votes going to waste.