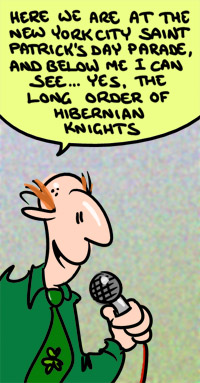 Ow. Ow ow ow ow. Look, I wish Enda Kenny well as Taoiseach. He has an unenviable job, I hope he does it well, I have more confidence in his ability to do it than I have in… Ooh, loads of other people. So to be fair I have to say that some really good promises were made today. Particularly, a ban on corporate political donations. I also like single-tier health very much, and a Minister for Children may be a good idea even if it does sound odd.

But he needs to be able to give a speech that doesn’t make me wince like I’m listening to a gas cylinder being whacked with a jack handle. He must get a professional speech writer. I know he doesn’t have one, because no paid writer could be that bad. Please to God.

“The long Hibernian nights on the western edge of Europe” he intoned, alluding to… something, I’m not sure. I was too distracted by the apparent implication that nights get longer the further west you go, by trying to figure out what exactly makes a night Hibernian, and by wondering if I was taking him up wrong entirely and the Long Hibernian Knights were a 70s heavy rock band. Imagery was strewn around the speech like low coffee tables, adding little decorative or useful, mainly just impeding progress.

And then bills or tax demands or something hitting people’s doormats “like stealth bombs”. What the fuck might a stealth bomb be? Enda there are stealth bombers, which are planes that are hard to spot, and there are smart bombs, which can be guided to their targets. Stealth bombs would be bombs that you don’t notice.

No seriously, I’m not listening to five years of this.