There, it felt good to say that. Of course he is far from alone, it almost seems unfair to single him out, but because of our wealth-favouring libel laws it’s not often you can actually come out and name one of the bastards.

Today I can, because a judicial body, the Moriarty Tribunal, says it is beyond doubt that Michael Lowry, when Fine Gael minister for transport, energy and communications, gave “substantive information to Denis O’Brien, of significant value and assistance to him in securing the licence”.

The licence they speak of was for the country’s second GSM mobile phone network in 1996, the biggest contract ever awarded by the State to a private company. Denis O’Brien’s Esat consortium won, even though by proper procedures their bid would have come third. In a transaction which the Tribunal concludes was not unrelated, Minister Lowry was given a huge wad of cash. And when that licence was later sold to British multinational BT, Denis O’Brien made more money than you will ever even be shown a picture of. 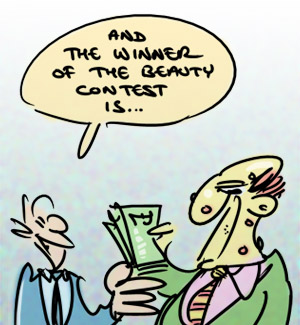 Interestingly, while the Tribunal’s report calls this “a cynical and venal abuse of office”, it doesn’t actually call the act corrupt. I refuse to be so mealy-mouthed. If he cynically and venally abused office, if he received money in consideration for bending the rules to favour the giver, then Michael Lowry is as crooked as a snake with stomach cramps.

Moriarty does use the word corrupt with reference to an unrelated deal between Lowry and another tycoon, Ben Dunne (most famous for giving an unexplained million or two to former Taoiseach C. J. Haughey). Dunne reacted with outrage, saying that if they wanted to call him corrupt then they should put him in jail.

Denis O’Brien likes to emphasise how much money the State has wasted on trying to catch him. The Irish Times puts the final costs of the Moriarty Tribunal at over €100,000,000, though O’Brien has set up his own site to lie about and exaggerate the figure. It’s even got a picture of the gates of Dublin Castle on it, so it gives the impression of being official. That’s how crap the man is.

He is right though. As is Ben Dunne. The money spent on the Tribunal has been wasted. It will remain wasted until he and his fellow corrupt and corrupting businessmen are safely behind bars, along with the politicians they paid for.

4 replies on “Michael Lowry Is A Corrupt Politician”

[…] room full of buggered children and still vote him in because he's "good with children". Michael Lowry Is A Corrupt Politician | I . D O U B T . I T/ Closing time on a typical Saturday night in Liberty Square, Thurles Google Image Result for […]

[…] room full of buggered children and still vote him in because he's "good with children". Michael Lowry Is A Corrupt Politician | I . D O U B T . I T/ Closing time on a typical Saturday night in Liberty Square, Thurles Google Image Result for […]