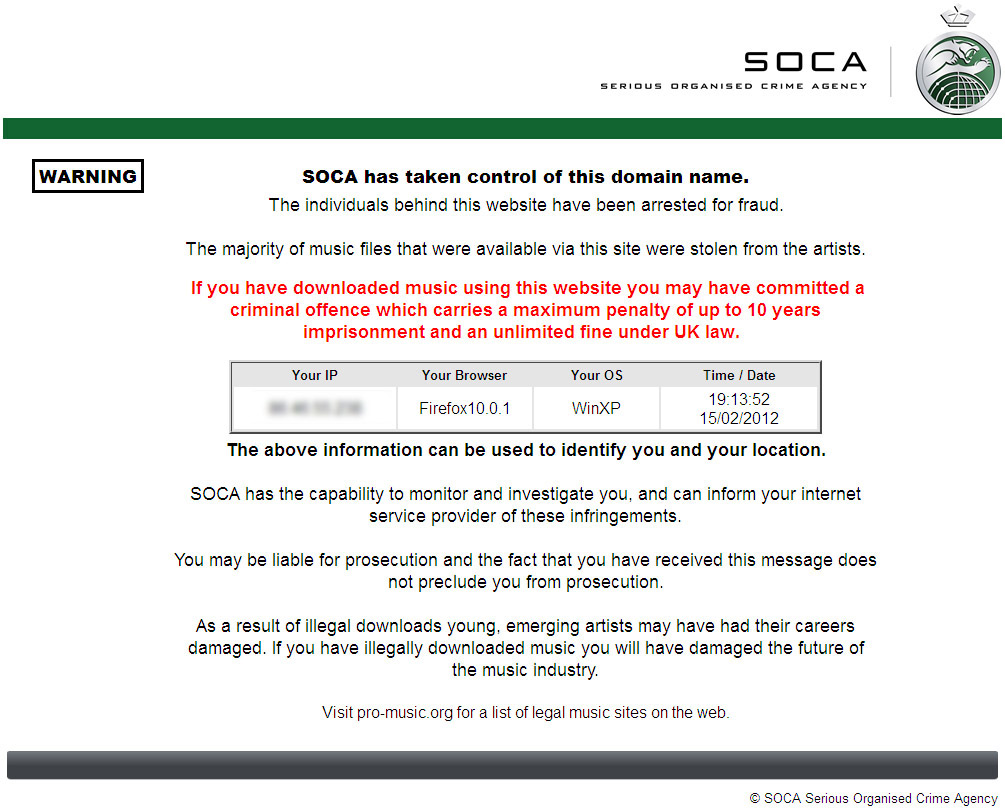 This is the stupidest thing I’ve seen in months – and I am a connoisseur of stupid. RnBXclusive.com, a music download site, has been taken down by an organisation calling itself the Serious Organised Crime Agency.

The image above though – click to see it full size – is what it looked like yesterday; a page put up by this SOCA plainly intended to scare anyone who visits. I kid you not. And despite their Captain Scarlet-class logo, the Serious Organised Crime Agency are an honest-to-goodness branch of UK law enforcement which, when it’s not busy, does real work against real crime. Which means that making music available for download is serious crime now, alongside drugs, extortion, and human trafficking. Thanks to the lobbying of the entertainment industry. Indeed the notice reads like it was drafted by industry spin merchants:

“The individuals behind this website have been arrested for fraud”

Arrested, not convicted. The logic is that some of the tracks made available were not officially released yet and so obtained by illegal means, and that constitutes fraud. Seems tenuous, but we’ll let it pass.

“The majority of music files that were available via this site were stolen from the artists.”

Copyright infringement is not theft – not even in law. If they are implying that the majority of tracks on the site were obtained from record companies by illegal means then that, let us say, seems unlikely to be true.

“If you have downloaded music using this website you may have committed a criminal offence which carries a maximum penalty of up to 10 years imprisonment and an unlimited fine under UK law.“

You can get ten years for downloading a music track? Absolutely untrue. The penalties for copyright infringement are not that draconian – yet. The tortuous logic of this seems to be that by downloading the file you are participating in a conspiracy to defraud. This should be laughed out of court.

“The above information can be used to identify you and your location.”

This is designed to frighten children. Of course a website you visit knows your IP address. Unless of course you actually are a criminal, in which case you’d take the trouble to disguise it.

“You may be liable for prosecution and the fact that you have received this message does not preclude you from prosecution.”

You may have already won $1,000,000. Again they are trying to scare kids with vague half-truths. Which is not what I thought law enforcement was about.

“As a result of illegal downloads young, emerging artists may have had their careers damaged. If you have illegally downloaded music you will have damaged the future of the music industry”

Still trying to make kids feel bad. Trying but failing; the kids know that illegal downloads are as likely to promote the careers of “young, emerging” artists. They also know that the music industry has no future if it goes on like this.

This page has been taken down now, because “that stage of the operation is over”. Well yes. Over because it was widely and rightly criticised. It now links instead to SOCA’s own site, which among various other questionable claims states:

“IFPI estimates losses to legitimate businesses and artists caused by the site to be £15m a year.”

The IFPI is the International Federation of the Phonographic Industry – a lobbying group. So what the SOCA is saying here is “We report entertainment industry PR bullshit as fact.” Again, not what I thought law enforcement was about. In the minds of the industry every illegal download is the loss of a full-price sale, and copyright infringement costs them more money than the record-buying public ever had to spend. Yet it’s they who are convincing politicians to sponsor terrible laws like SOPA and ACTA, laws that if passed will curtail real freedoms that we legitimately enjoy. All because these people submit present masturbation fantasies as evidence.

There’s some incredibly meme-a-riffic “why so serious?” jokes there.

I can’t really get worked up about the site getting a misinformative frontpage as replacement. It’s that the UK government actually named/enabled an agency with a name that belongs in a comic book. I mean, serious.

Surely you can’t be Serious.

Seems like law-enforcement as usual to me, but I live in the US. Little story:

Shortly after I turned 18 I had a verbal fight at a shopping mall with the younger sister of a kid that got expelled for attempting to cheat off of me (I didn’t turn him in, but I admitted to him trying when he was caught and I was accused of helping). As part of the yelling, she told me she was going to claw my eyes out, to which I told her I would have no problem defending myself and pointed at the non-concealed knife I carried at the time. She and her one friend who was with her ran to the store where her boyfriend worked and called the police, telling them i pulled the knife on her unprovoked. When the police arrived I was immediately put in handcuffs, as was one of my friends (the other friend was left uncuffed because they only had two sets). The police refused to pull the security video from the mall that was pointing right at where the fight happened, they refused to take the statements of the mall security guards, employees of the stores that the fight happened in front of or my friends. The did accept statements that were handwritten by the girl that accused me, her one friend that was at the fight, her boyfriend and a fourth individual that was friends with them. Those statements were handwritten in a closed room with no police supervision and, because they were written in pen, clearly showed where details had been crossed out and rewritten to make everybody’s statements exactly the same. The police report matched the 4 witness statements almost exactly.

The police don’t seem to think their job is to preserve justice or find the truth, but to prosecute the poor fool that was accused of a crime.