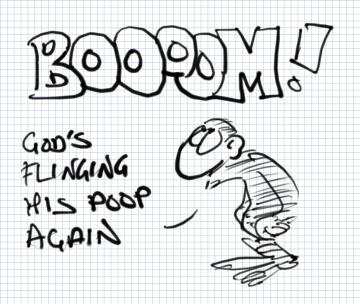 I came across something extraordinary. Chimps may have a religion.

When the seasonal rains come, chimpanzees – the dominant males especially – do a special sort of dance or ritual. It’s hard for us to guess their motivation of course. Are they celebrating the change of season, defying it, placating it? All you can really say is that it’s a social reaction to an environmental phenomenon. And that is surely one of the hallmarks of religion – personifying and attempting to communicate with natural forces.

It’s especially interesting when you consider that there doesn’t seem to be a human society without some religious sense. A traditional (non-religious) explanation is that when faced with the inexplicable, we are forced to ascribe it to the caprice of an unknown will.

Seen that way, religion is a consequence of intelligence. But what if all humans have religion because religion is older than humans, and our ancestors treated the forces of nature as living beings, malevolent or benign, long before they had language or culture?

It would explain some things – like how people with barely any language or culture can be so religious today.

4 replies on “Roots Of Religion”

Man, these fucking dancing dominant males. They’re just waiting on a chimp to growl something factual so they can condemn it as heresy.

Maybe there was once a golden age of religion – that ended the moment people could talk about what it actually meant.

I think it’s wonderful to see such behavior! To me, though, it seems like what I’d call superstition, and that doesn’t sit far from animism as a sort of religion. I recall, though I haven’t researched, that someone like Skinner saw some behavior like superstition in his test pigeons when they were in boxes, pecking symbols for food.

I’m so thrilled that it’s been observed in the wild. Maybe, in a few hundred years, humans will recognize their rain-god-dancing and eucharist waving as meaningless posturing, too. I don’t know what we’ll replace it with, but I’d be so pleased to leave it by the side of the road.

Yes – If you feed pigeons, they will repeat the actions they performed immediately before the feeding, in the hope that recreating the circumstances will cause food to appear again. I wouldn’t call it superstition though. After all, it’s nothing more than learning. It’s superstition when humans do it because we really ought to know better.

Of course even if chimps are personifying nature, that’s only one element of religion as we understand it. I wonder if this activity is not more about the males having a formal opportunity to display and compete in a safe, ritualised way with no real hostility. – the thunderstorm or waterfall being a mock ‘common enemy’ for them. So it reminds me more of a different (if related) cultural phenomenon. Chimpanzees have sports.