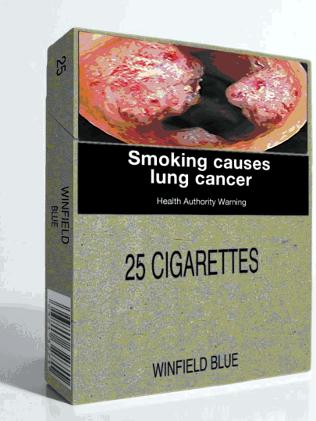 There’s a campaign on here to put cigarettes into featureless generic cartons, just as was recently done in Australia. Rather than the maker’s livery and logo they will be an unglamorous colour, uniform across all brands, and be covered in prominent and graphic health warnings.

I’m against this. It’s quite ridiculous, banning all the traditional iconography of smoking, celebrated in film and glossy magazine for over a century. No; cigarettes packets should be smeared in canine excrement and fired at the purchaser from a powerful air cannon while the vendor screams “Children can see you doing this, you pig-rimming imbecile!” Once the excrement has been wiped off, the packaging must clearly state the health warning “Why not just kill yourself now you bag of pus? In the long run it’ll be easiest for all of us.”

Giving up smoking is hard, and one of the things that makes it so is the easy availability of failure. You can walk into a shop on nearly every street and get failure handed to you, no questions asked. It wouldn’t work to ban cigarettes outright, but we could make it harder to fail.

It’s not always failure, because not all smokers are trying to give up? Wrong; not trying to give up is also failure. The only conceivable success when it comes to tobacco is to be as far away from it as possible; anything else makes you sicken and age and lose money.

Giving up is difficult because of the insidious nature of the drug, and up-givers need all the help they can get. The tobacco industry however is determined to give them every hindrance, and one way they can do that is by flashing images associated with the addiction at their victims as often as possible, igniting their reflexive cravings. Their branding, their logos, are weapons in their war against those trying to kick the habit. It’s cruel, and it kills. But it makes them money.

Representatives of the industry argue that banning their logos and liveries “effectively extinguished their intellectual property rights“. Why is it that bastards always cry infringement of intellectual property? Perhaps because it’s a sufficiently vague concept to be abused every which way. Whatever was intended by IP though, it was surely not the right to advertise no matter what is being advertised.

A branch of the UK industry lobby meanwhile, operating here under the unconvincing title “Forest Éireann“, says that there’s no evidence this packaging will discourage children from taking up smoking. Maybe so, it’s early days, but clearly it’s stopping someone smoking. Otherwise why would they be against it?

Repackaging cigarettes to better represent just how nasty they really are is a good idea. It may not have a huge impact, no. But even a small discouragement to smoke could save thousands of lives, and improve thousands of others.

By the same token, I think “Forest Éireann” should also be repackaged – under the name “We Want You To Die”.

One reply on “The Right To Kill”

That’s not entirely fair. They don’t just want you to die. They also want as much of your money as possible.