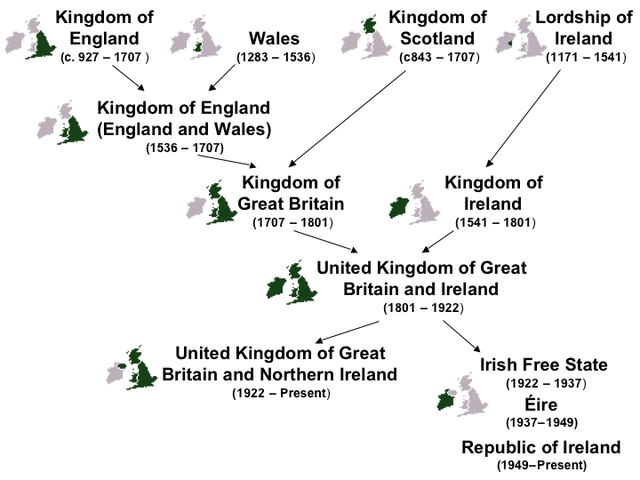 The final result of the Scottish Independence Referendum is still some hours off, so I will avail of this last chance to speculate. What will happen to Great Britain if Scotland really does leave?

Well nothing. Great Britain is the name of an island, not a country. Not even the proper name for it in fact – the more historical one is simply Britain.

So where did the “Great” come out of? I get the impression that a lot of British people vaguely think of it as a title their country was awarded somehow. At a country show, presumably. I have even heard people who should know better espouse the folk etymology that Britain refers to the combination of England and Wales, which became Great Britain with the addition of Scotland. That is of course completely made up.

Great Britain is simply the English for the French name for Britain – Grande Bretagne – and might be more accurately if prosaically rendered “Big Britain”.

Little Britain in this instance being Bretagne – or as we call it, Brittany – a province of France that was settled by people from Britain and where a language closely related to Welsh is still spoken today, now and again. Somewhat ironically perhaps, these British colonists were actually refugees, fleeing from the foreign invader we now know as the English.

Well partly, them – to be honest they were being invaded from Ireland too. After the Romans withdrew from Britain it was basically a warrior’s free-for-all.

So Britain was called Great Britain merely to avoid confusion with the French name for a Welsh colony. It’s like an irony layer cake. But French was the dominant language of much of Europe – and indeed, of Britain – for many centuries, so the “Great” stuck.

And still sticks today, and becomes ever more sticky. It is now kind of embarrassing, used when they can’t think of an idea for a cooking programme, or for politicians to clutch when they have reached the absolute nadir of rhetorical inspiration. It is high time a way was found to retire the term. And if Scotland does ever leave, that would be the moment. To refer to what remained as Great Britain after that would sound like sarcasm.

But what else could the remaining country be called? Well the answer is obvious, and I’m surprised it didn’t come up more in the debate. It would of course be the United Kingdom of Southern Britain and Northern Ireland.

I’d go for the United Kingdom of Central Britain Betwixt the Chunnel and Hadrian’s Wall, and Northern Ireland. And yea Wales And The Other Parts Of Course. (UKOCBBTCAHWANI.AYWATOPOC)

I’d go for the United Kingdom of Central Britain Betwixt the Chunnel and Hadrian’s Wall, and Northern Ireland. And yea Wales And The Other Parts Of Course. (UKOCBBTCAHWANI.AYWATOPOC)

There should always be one one completely unexplained quasi-sovereign town.