You know, before I got here I’d forgotten Angry Birds was a Finnish invention. There’s no forgetting after though – the merchandising is incredible. There are Angry Birds toys, Angry Birds sweets, Angry Birds drinks. There doesn’t seem to be a feature film or a cartoon series yet but that can only be a matter of time, the thing is practically a cartoon series already. They’re used to promote other products too of course. I upgraded a friend’s phone to the newest version of Symbian (more of that anon) almost purely so that she could get Angry Birds on it.

I have to hand it to makers Rovio for designing so brilliantly addictive a game – at one point me, my friend, and her daughter were all playing it at once – but I can’t help feeling that a lot of this is not so much merchandising as taking-advantage-of-childrenising. “l like playing Angry Birds therefore I want an Angry Birds drink” is the impulsive, associational desire of a mind that isn’t fully developed.

Yes OK I bought one. But that was research.

The drink was all right; a lot more fun though were the sweets, because they come in the shapes of the various bird types and you can mime their characteristic trajectories as they fly into your mouth.

To amuse the kids, I mean. 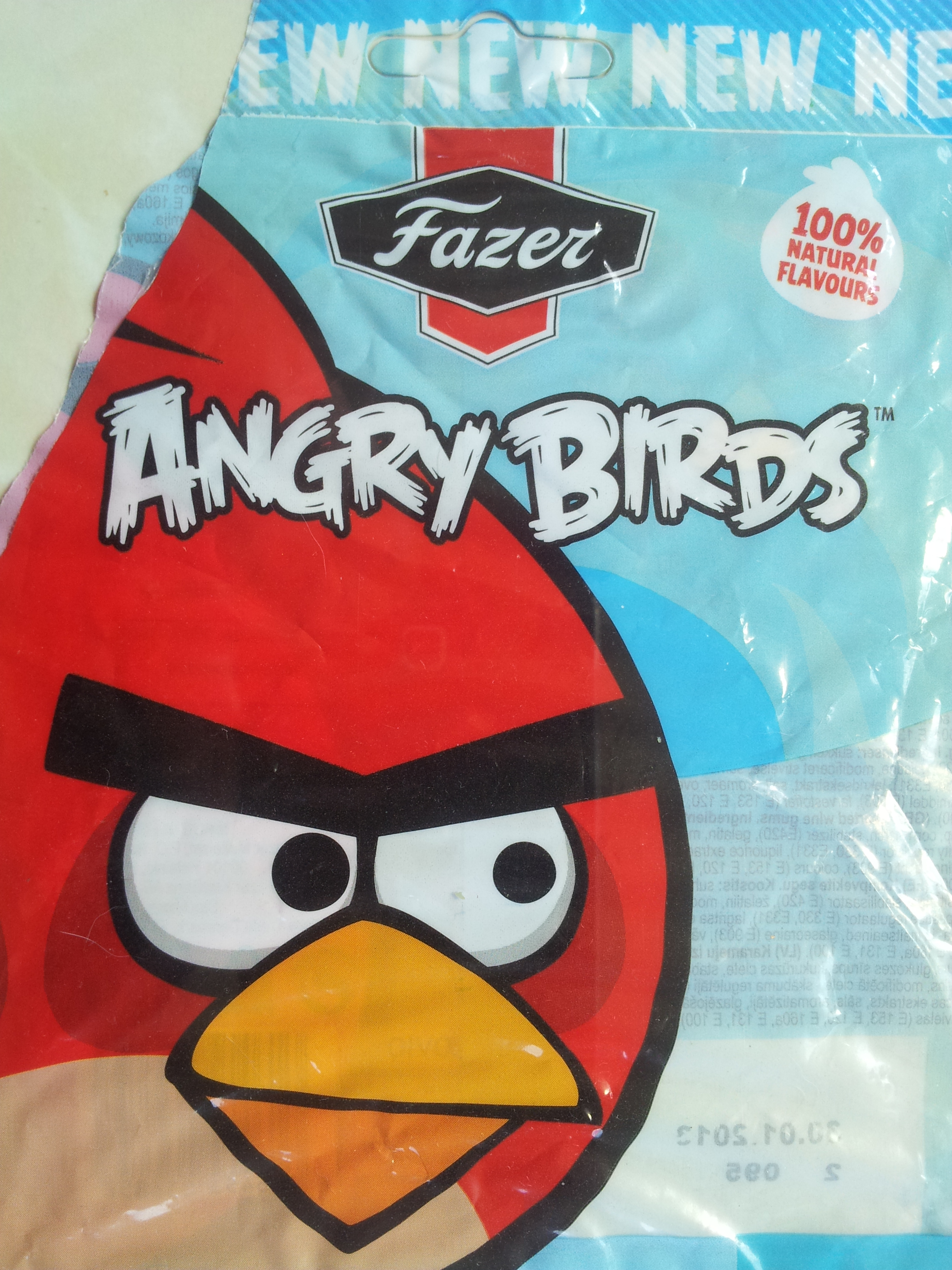 I used to think this was a peculiarly Irish term of abuse – “Ya shitehawk ya” – with origins obscure and possibly whimsical. Some say it originally meant a manure pedlar. But it seems not; for the shitehawk is a real bird.

And not just any old bird either, but one of the most attractive and impressive of the smaller raptors – the red kite. This is a beautiful creature with ruddy feathers and a swift-like forked tail. It also happens to be a hawk for shite.

Or to put it in more scientific terms, as well as being a bird of prey it’s a carrion feeder, eating the bodies of animals it didn’t kill itself and other handy leftovers. A lot of the raptors double-job like this; after all if you’re built to chase down and murder living food you’re probably pretty high up the queue for the dead stuff too. Indeed debate still rages over whether their cousin¹ the Tyrannosaurus was mainly predator or scavenger. So the red kite is attracted to human settlements, because we pretty much live knee-deep in delicious detritus. It hovers – literally – about our dumps and middens.

It’s as a predator though, taking things people wanted to keep like rabbits and young chickens, that it became persecuted as vermin and was once in danger of extinction. Though not before British soldiers had a chance to apply the same vivid name to the carrion birds they met abroad. In India therefore the shitehawk was a vulture. And apparently the word persists in this role in parts of England, except applied to that new ubiquitous flying rat: the seagull.

I like that – I think I’ll refer to gulls as shitehawks from now on. The name suits those raucous opportunists (video) far better than it does the rare and pretty red kite.

Unfortunately China is the name of my mother’s cat, and her feline idea of a neat gift is a small mammal. In this case, about as small as they get – a pygmy shrew. Poor little thing. I’ve shown it here with a credit card as they’re the same size the world over. As you see, it’s no bigger than your thumb.

Well, it’s nature’s way I guess. I mean, we actually have this cat around in order to murder small mammals, so I can’t be mad with her when she catches a non-verminous one. Though I notice there’s an ongoing debate in the US about whether cats are a major threat to the balance of nature as they’re not a native species. Well I suppose nothing is a native species if you go back far enough, but as domestic cats have only been in North America for a few hundred years you could see how the native birds aren’t prepared for them, and though it would be surprising if there wasn’t a native predator in the same niche, I can’t actually think of one. What catches small wild birds in North America? I don’t think coyotes do. Fisher cats perhaps, and related weasel-like things. But they are only found in some climates.

I don’t know; as far as I’m aware, cats in North America have never really gone feral and therefore are only found where humans live. And with a few exceptions, the balance of species in such places is never going to resemble what it did before farming and industry. So I suspect removing cats would be like trying to make a shopping mall more like a forest by painting it green.

But perhaps I should know better than to get into an argument between cat people and bird lovers.