But the news today finally got my attention. It seems only recently we were having a war against poverty. Now, it’s all-out war on the poor.

I really didn’t expect Clare County Council to be leading the charge though.

Some background: In 1977, during a boom not so unlike the one just past, Fianna Fáil bought an election largely by abolishing local taxation. From now on, the towns and counties of Ireland would be funded not by householders, but from central government. This situation was allowed to continue even after the economy fell face-first off a cliff in the early 80s.

After this latest crash though, and the terrible deals made to get out of it, they need all the money they can get. So if there’s an asset that can’t be hidden – like say a job or a house – a tax has been slapped on it. At the moment there’s only what they call the Household Charge, an almost token €100 a year. This is just a clever ruse though. They believe people will be shamed into paying it. What householder cannot afford €100? Look at all you get for it! But it’s a trick; what they want is to get people onto the radar. Ultimately of course they intend to charge us far more than €100 a year, but thanks to the intervening 35 there is no reliable and comprehensive registry of home ownership in this country. So a property tax would be an administrative impossibility – unless we are tricked or forced into volunteering the information ourselves.

That’s why they’re being such hard-asses about it. Central government is forcing local to force people to put themselves on the register, by the brutal tactic of declaring how many households there are in a given locality, and reducing central funding by that times €100. Local government will now run out of funding for services like water and sewage and waste – unless they squeeze it out of the people they’re supposed to be representing.

Another service local government funds – for reasons lost to time – is higher education support. What fee assistance and maintenance grants they provide though are heavily means-tested and only paid to the poorest. And now, in Clare at least, applicants will also be required to provide proof that their families have paid the Household Charge.

This is not right, and it’s not right for a whole bunch of reasons. It’s contrary to several important ideas about how society works. Are we really going to stop services for everyone who hasn’t paid their taxes? Other forms of education too? Hospital services, welfare? If so, then surely Bertie Ahern should have all his pensions withdrawn. Are we going to put pressure on parents by withdrawing life opportunities from their children? Will we discriminate against children and young adults because of the choices of their parents? Will we set families against each other to raise tax?

Yes, some people aren’t paying this because they don’t want to get on that register when they know they’re going to be hammered by a new property tax. These though are hardly the people who qualify for the paltry maintenance grant. Others refuse as a form of protest, because they consider it unjust that the ordinary citizen of this country is being forced at financial gunpoint to pay off the losses of multinational banking giants. And they are right, it is unjust. To pay this tax is effectively to hand money over to a banker; not money that you ever owed to a banker, but money that a corrupt government promised to this banker. Why would you pay that?

And then there are some who simply haven’t been able to spare that €100. This is an (inadequate) subsistence grant which only the poorest, remember, can qualify for. Making it a condition of educational assistance provides yet more discouragement to the underprivileged, pulls jobs and wealth still further away, strikes another blow for the rich against the poorest. Another in an incessant rain of blows.

But it really doesn’t matter what the motivation of parents is. To use their children as an instrument against them speaks of a society that has divested itself of all values except the monetary. I realise Clare County Council are under a lot of pressure from our broken government, but they need to be deeply ashamed about this.

Oh, I have no dog in this fight by the way. The banking industry’s failure has already taken away all maintenance and fee support for postgraduates. I will have to borrow the money for my degree. And pay it back, with interest, to a bank. 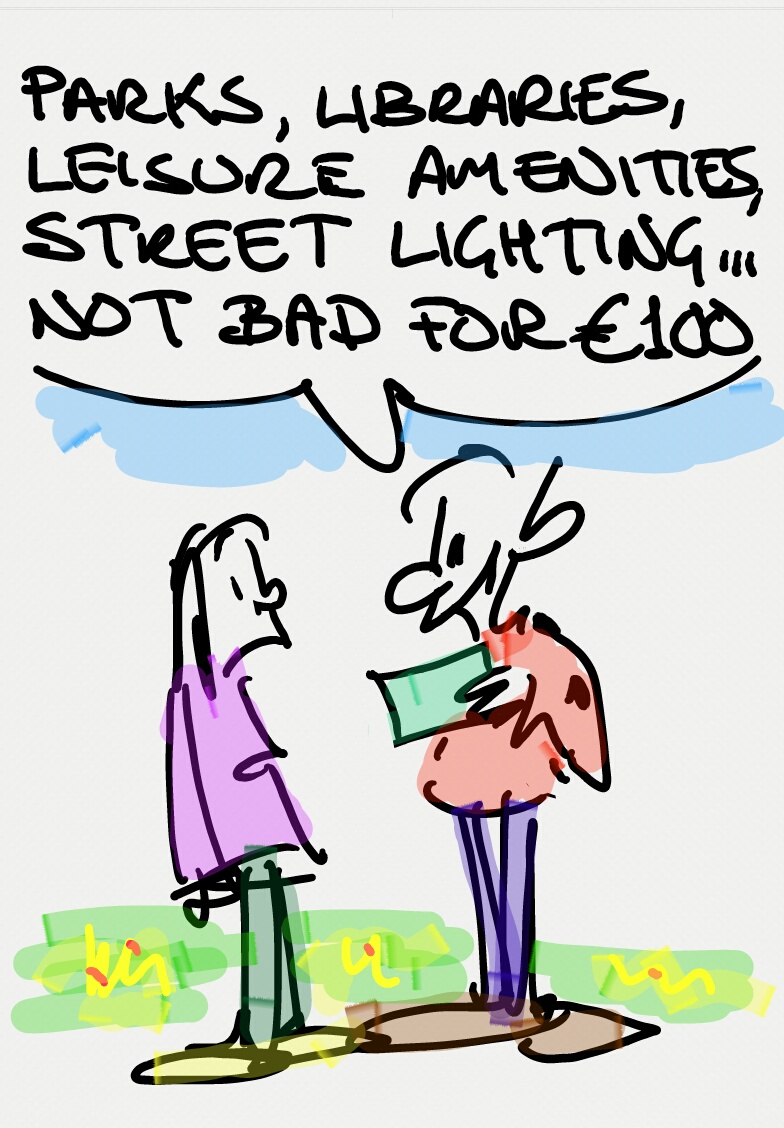 “Better communities start at your doorstep.”

That’s what it says on the final reminder to pay your Household Charge (the new property tax being introduced here in Ireland). They manage to combine meaningless bullshit, calculated deceit and veiled threat all into one brief phrase. That shows flair.

Don’t pay the charge and your neighbors suffer, it seems to say. As if central government is lowering its funding to local authorities by precisely the amount the household charge should raise. Of course, central funding for local spending will be reduced by far more than the household charge was ever going to raise – even if everyone could pay, never mind will. The shortfall will eventually be made up by allowing local authorities to raise the charge. So central government can keep lowering its contribution, effectively raising taxes while avoiding blame.

I just wish though, instead of this careful blend of wheedle and threat, instead of pitting neighbour against neighbour, they’d try being honest for once.

“We’re sorry, we know it isn’t fair to ask you to bear such a big portion of this debt. But as you probably know, the more money people have, the harder it is to get it out of them. We promise we’ll go after the the tax-dodging bastards, but right now we need money fast and it looks like it’s got to be you. What do you say?”