The doll on it by the way is my friend Jenny, doing what I think may be her first ever public performance of her own composition, at the AMP end-of-year showcase gig in Kelly’s Bar. 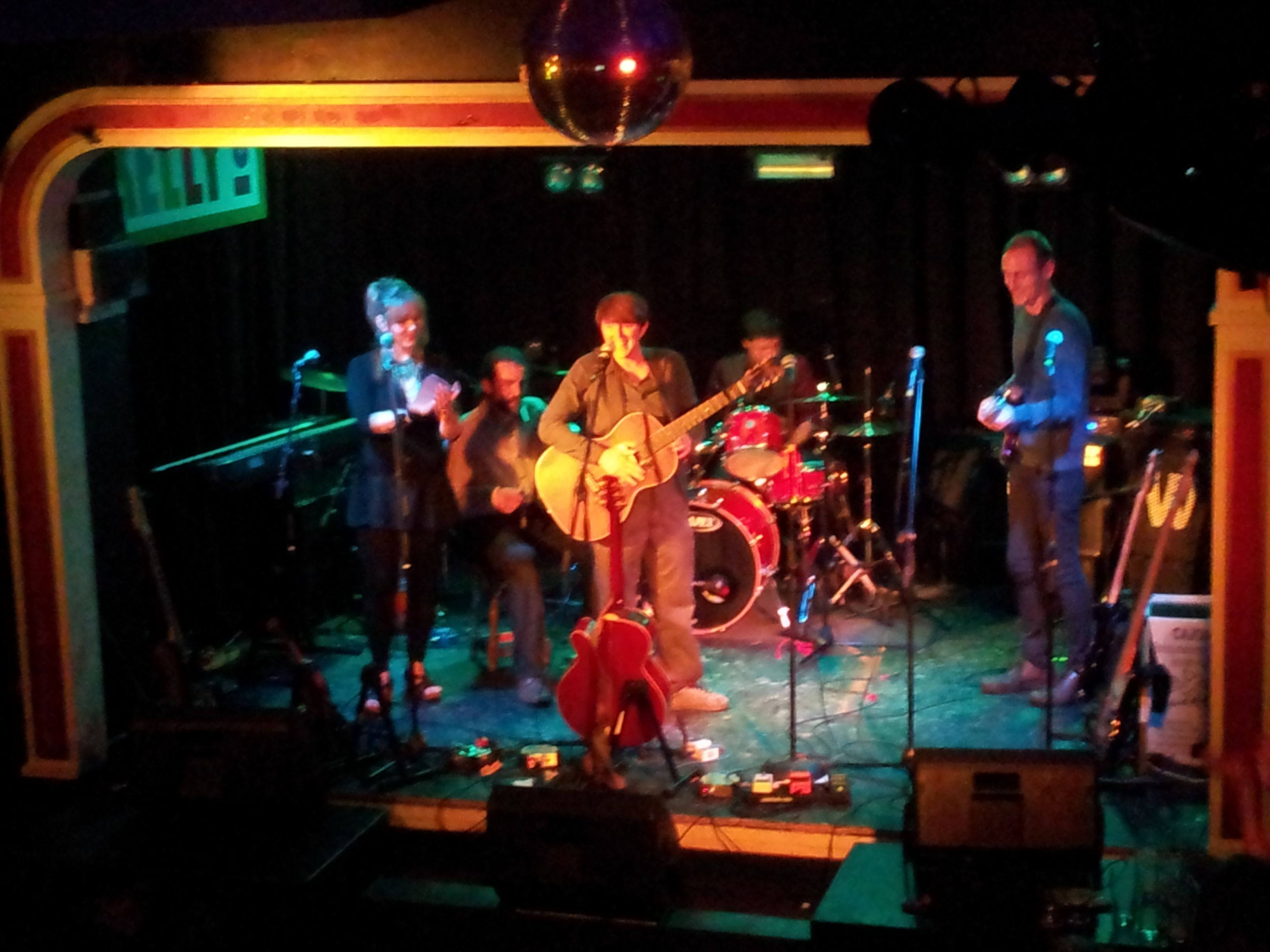 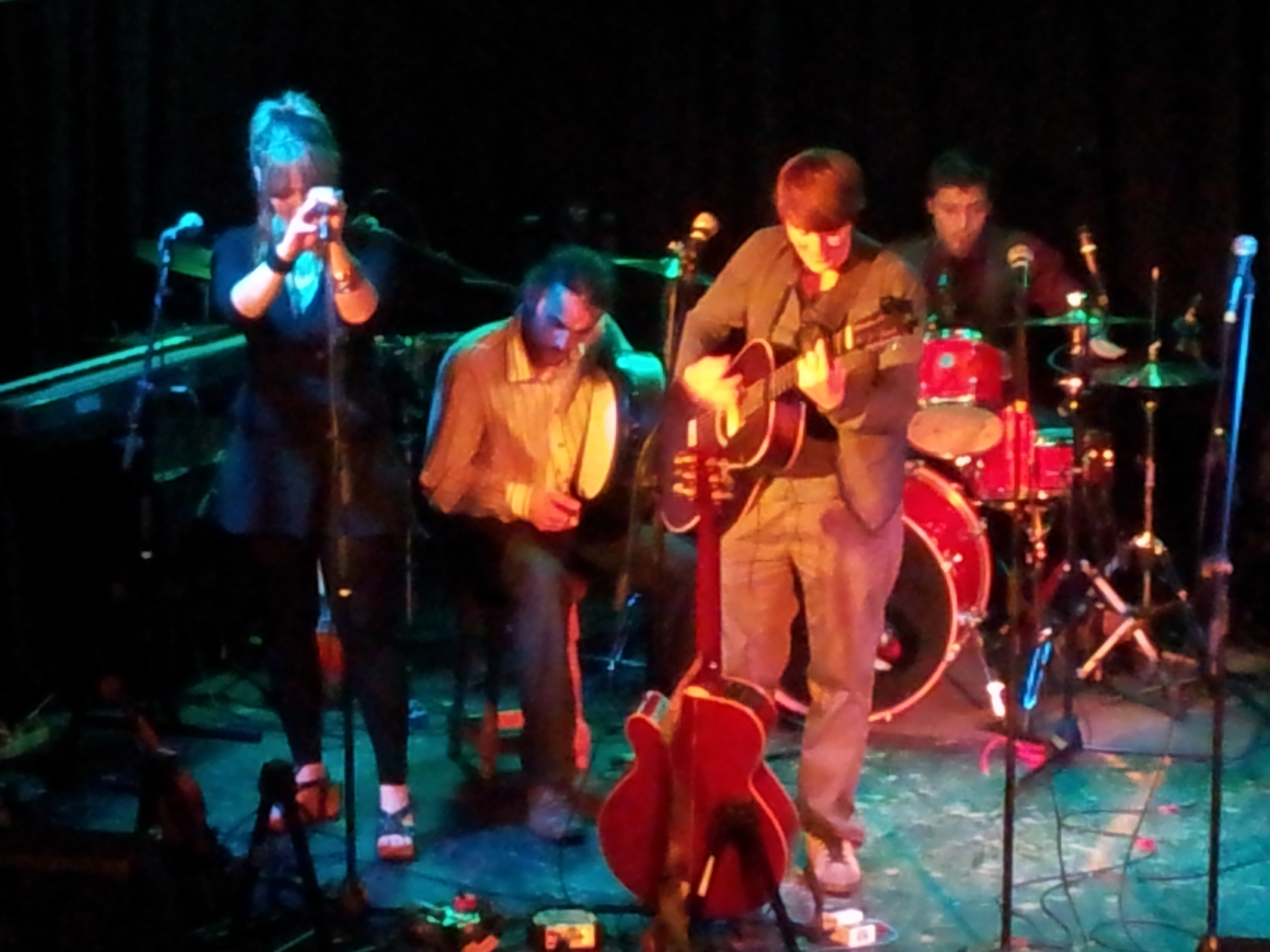 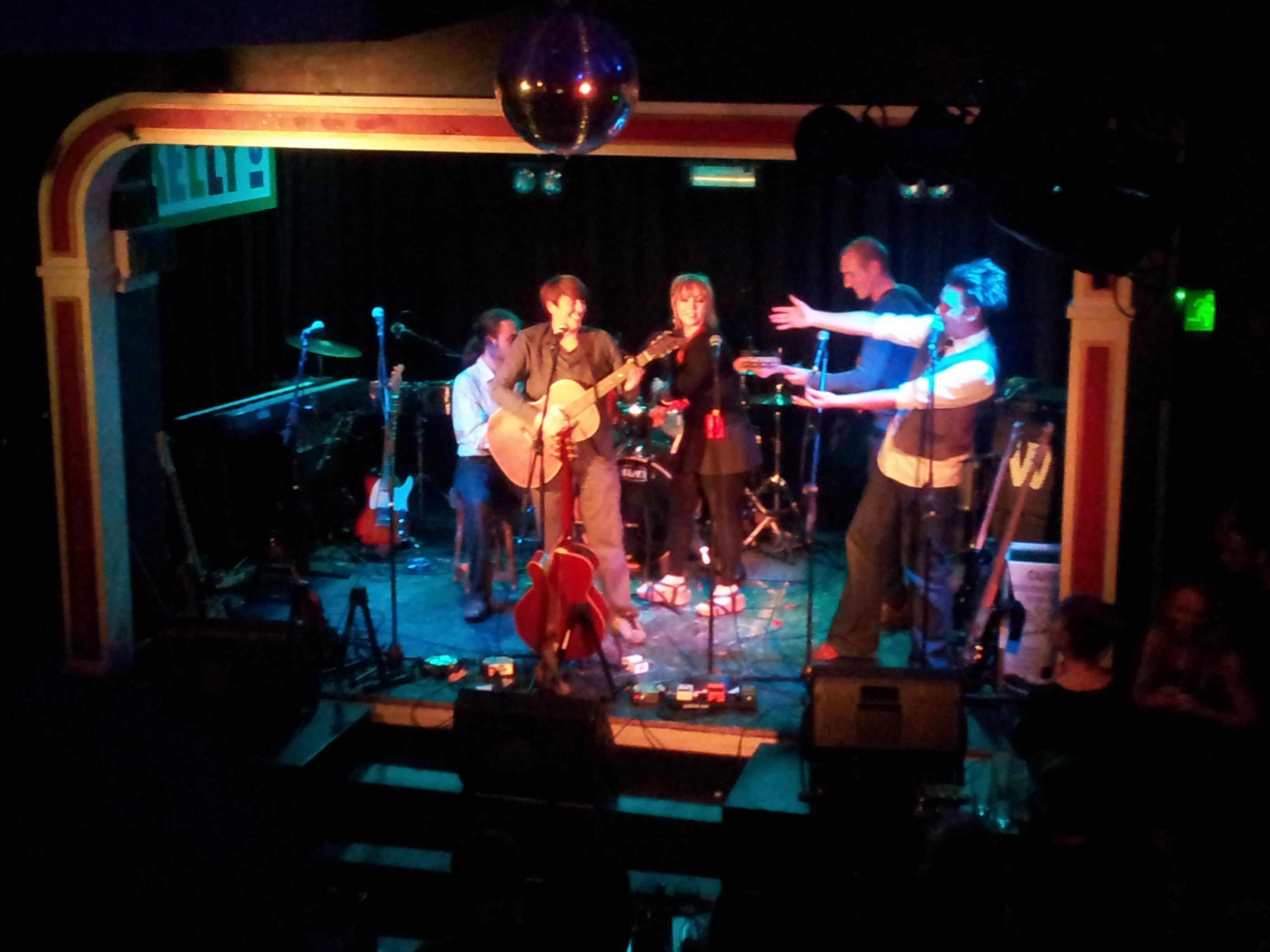 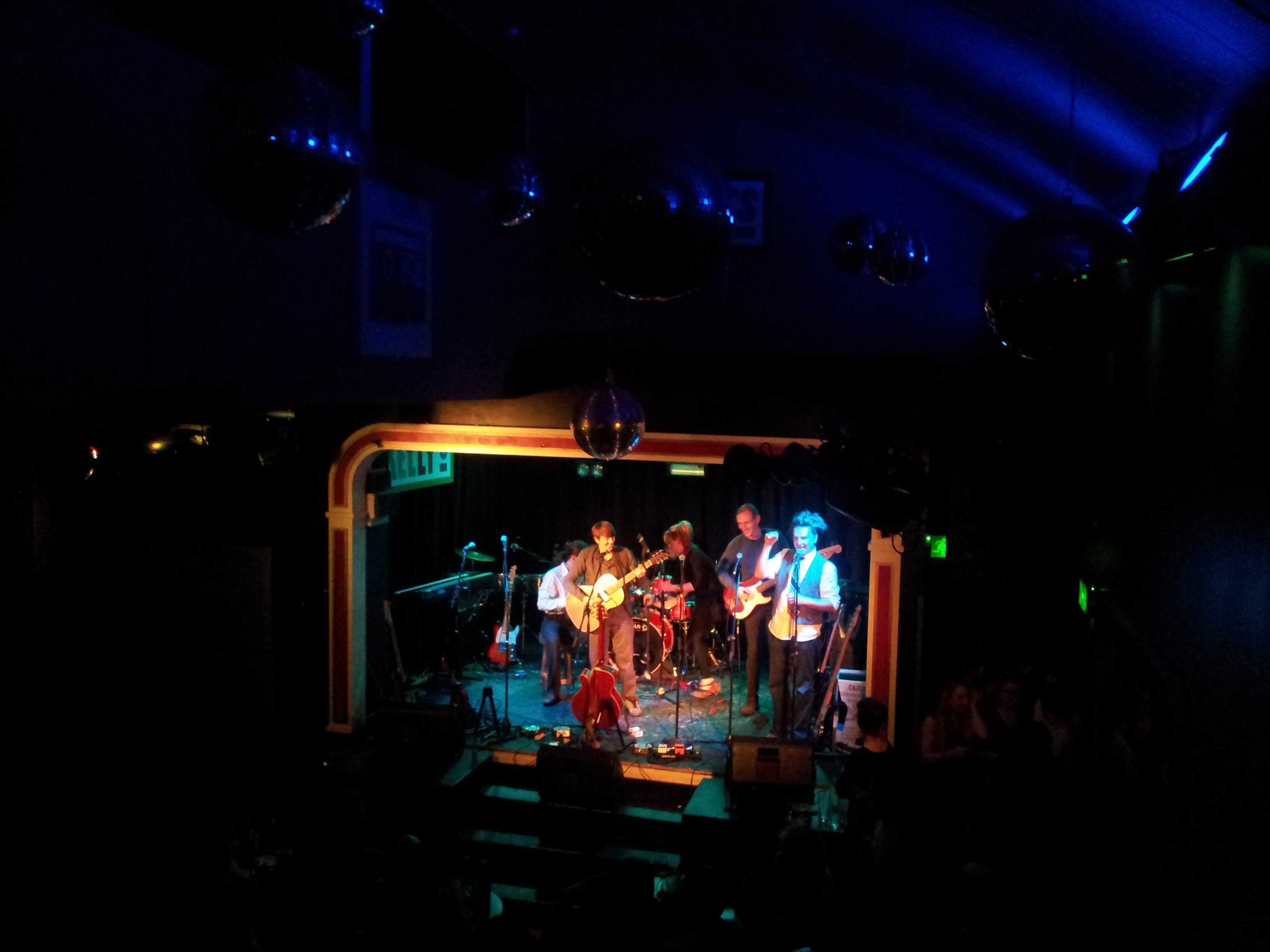 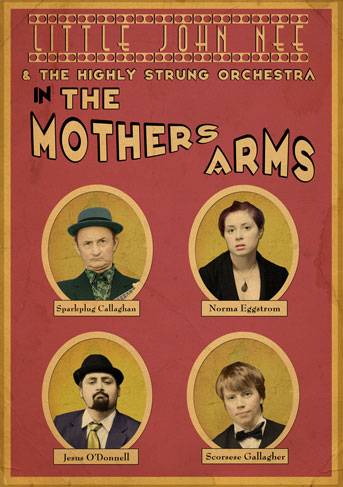 OK, maybe I’ll have to be taking two days off per week. One for college, the other to recover from college. Or maybe I’ll get more used to this, we’ll see.

I’ll tell you about my back-to-school experience tomorrow though; first I’ll talk about this show while there’s still a chance you could make it. Well, the final performance is on at 8:00 tonight at the Town Hall Theatre Galway, so you’ll have to be fairly near. Or what the hell, charter a plane. It’s pretty good.

People from Galway will need no introduction to… well to anyone really. We’re informal like that. But Little John Nee will be familiar to most. A clown, musician, actor and street performer for his day job, about once a year he puts on a theatre show. In Galway it’s one of the events of the Season.

Always funny and poignant, a Little John play can sometimes have a serious historical or social side too. The Mothers Arms, not so much… This is straight-up comedy, albeit of the dark persuasion. Our protagonist is a former blues man, who fell in love and became so happy he had to put down his ukulele (yes) and take up organic farming.

On collision course with his happiness: The Highly Strung Orchestra, a band on the run, plus Dublin property developers and Northern terrorists. The epicentre: run-down local singing lounge The Mothers Arms. Featuring an ensemble of misfits, tattooed ladies, tattooed gentlemen, and faithful old overweight dogs.

And all really just a story that Little John tells us. Though he illustrates it with music and is supported by three great musicians playing bits, it is essentially a comic monologue. Well mostly comic monologue, a little bit gothic opera, full of sharp, funny descriptions of rural life in a state of terminal disrepair.

It could have been longer. A problem with comic drama is that characters are introduced because they’re funny, and then nothing much happens with them. I’d like to see Little John do something more complex. But the meandering, anecdotal style is full of charm, and full of darkly amusing lyrics about contemporary life like, if I’m not misquoting:

A lovely little show, and very much part of the fabric of Galway culture. Catch it tonight if you can.

The heart brings me to the almost insolently pretty coastal Galway town of Kinvara, into a recklessly cute pub called Tully’s, and out the back to the barn. But this is the best bit. A big ol’ barn, but an atmospheric venue. Load of bands playing, including my friend Niceol Blue.

And I’m in the mood. So if you’ll excuse me this evening I’ll keep the words to the minimum, and turn the pictures up to eleven. 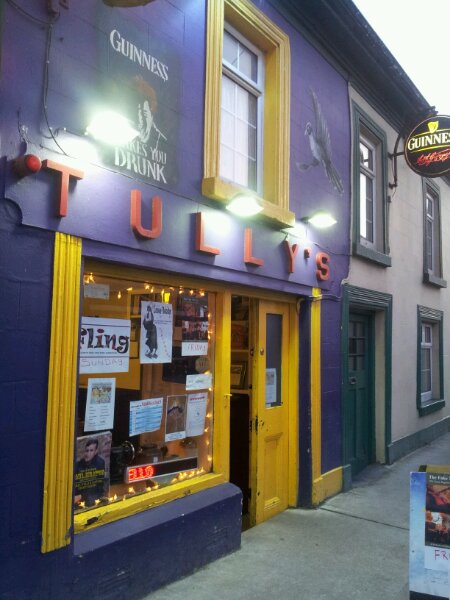 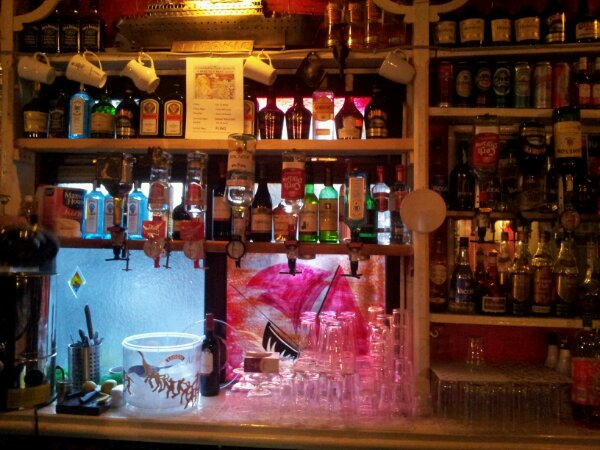 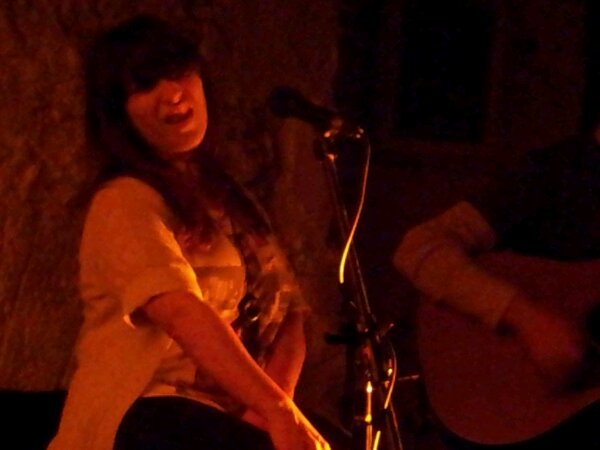 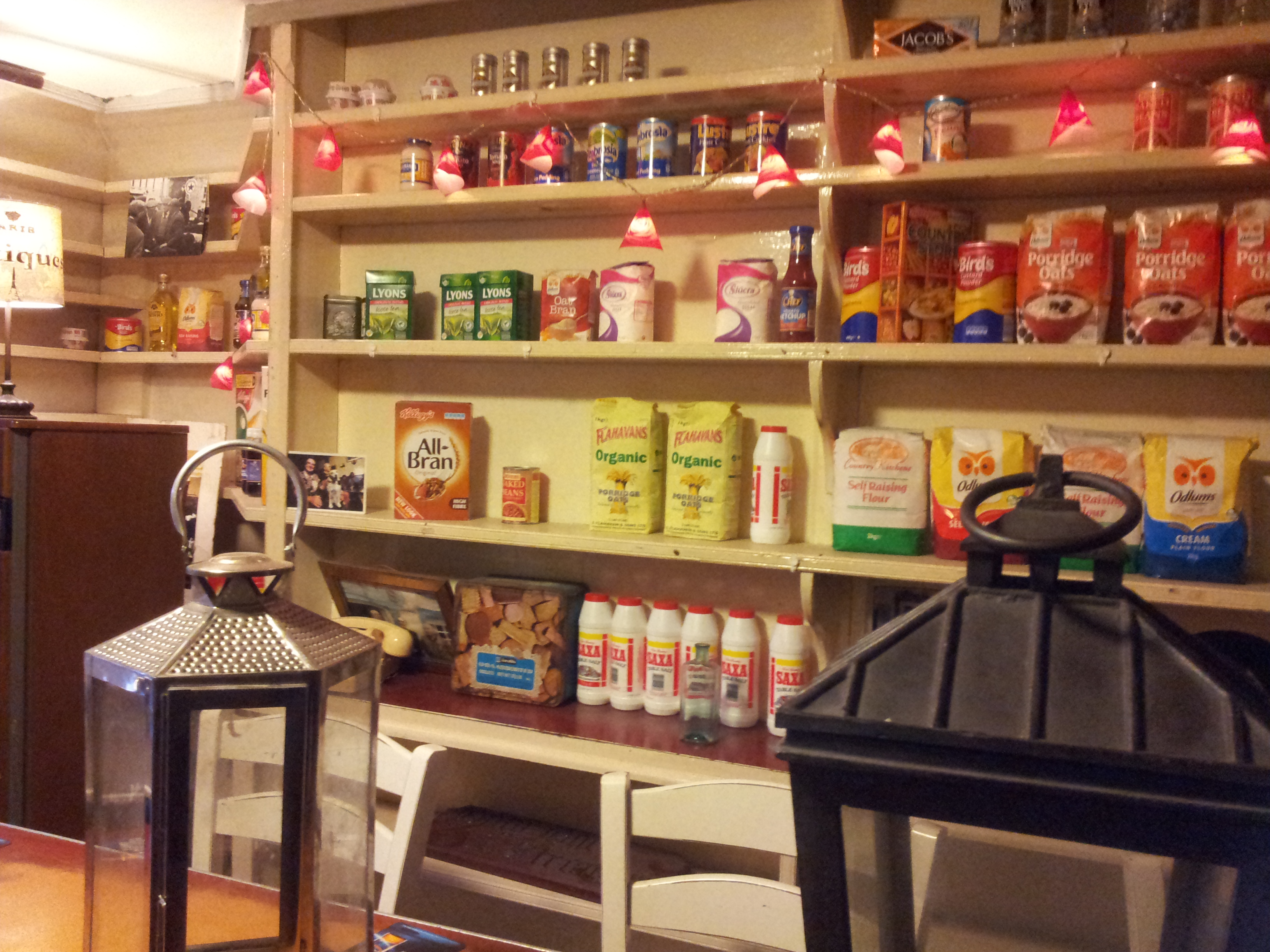 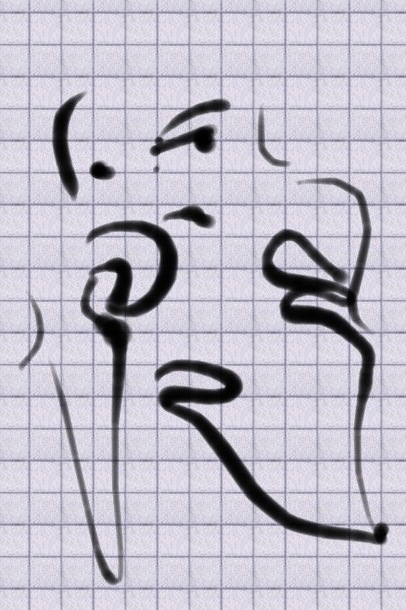 Niceol Blue seems to get mentioned on this blog more than any other person. That’s what comes I guess of having a wonderful voice and a computer almost permanently in need of repair – two things I have a weakness for. But she also organizes Mná Mná – Women in Music, a monthly showcase gig for musicians and particularly singers who are female. I’m worried overseas readers won’t get the title. Suffice to say, Mná is the Irish for Women, and is pronounced – more or less – “Mnah”.

It’s been on once a month for almost a year now, but to my shame last night was my first visit. I’ve been missing something good. A thing like this could so easily be what I might call… excessively supportive. But thanks to what I can only guess are hidden reserves of steely ruthlessness, the standards are excellent. Three acts last night, each worth the entrance.

Next month will be a special gig for their first anniversary – definitely one to watch out for. You can sign up for notifications here.

Obviously I can’t keep using this space to go on about my personal feelings. There are issues to discuss, wrongs to right. I have made up my mind to be strong, put all this behind me, move on.

Only not yet. Not just yet.

It’s the little things. Problem is, life is made up almost entirely of little things. In the middle of the simplest task it will hit me – we’ll never do this together again. I will never spread butter with her, never dry the dishes. Loss is moments.

I should have seen it coming? I did see it coming. It’s funny, how one part of your mind can know perfectly well something is going to happen, but another part will refuse to be told. I know I knew, because for several days before the break-up I couldn’t get one song out of my head. Breaking Us In Two, by Joe Jackson. Remember it? “You and I could never live alone. But don’t you feel like breaking out just one day on your own?”

It had been haunting me. I even learned the lyrics, those lines that I had never been sure of. I wanted to sing it to her, though I didn’t think I would ever be able to do it justice. A beautiful song about a relationship slipping away. It said a lot, I realise, of what I was barely aware of myself. My fears. But it spoke about my hopes as well. That last verse is the killer.

In direct contravention of copyright law, I reproduce it here in its entirety:

We’ve passed through the village of Drung and are now approaching Tang. For directions someone could have told us to follow the sound of falling cutlery. On our way back from the Flat Lake Festival, where people from all around the country bring their smoothest lakes for comparison. Though I told someone I was going to the Sloped Lake Festival. Where are they having that she asked. Up a hill.

OK, it’s a literary and music fest. A strange-sounding combination, but it works because it’s in a very big field. Headliners included novelists John Banville and Pat McCabe and journalist Robert Fisk, and on the music side Fred and Jinx Lennon. Except there weren’t any headliners because it was all equal billing; those are just some you might recognise. There were pals there too, including physical theatre duo The Gombeens, Niceol Blue whose band I mentioned last month, and her partner Órla the improvisational actress.

Sadly, due to circumstances beyond our control, we could only stay for one afternoon. Due to circumstances beyond anyone’s control, it rained steadily and absolutely throughout. Everyone we met – and the place turned out to be full of people we knew – seemed eager to tell us that the day before had been so hot they could barely move. Just what you want to hear when your hat has soaked through and you’re up to your ankles in slippery muck. Nevertheless we had a great time. If the atmosphere was so good in the rain, in the sun it must have been very nearly frightening. Definitely one to earmark for next year.

I was rushing for this bus so there wasn’t time to look twice but I could swear that as I passed a shop I caught a glance of tanks full of fish on the floor, and people sitting on benches with their bare feet in the tanks. Funny, I thought. I never took all that much acid.

Bu that’s a thing now, isn’t it? Supposedly the tiny mouths of very small fish are meant to clean you better than scrubbing or using a soap. Better in what way exactly, I am unclear. More erotically I would think. But perhaps that’s just me.

There’s the Shannon. Just leaving Connacht now and entering Leinster, next stop Dublin. By tonight though we’ll be in Ulster – in the tiny and pretty much unknown town of Ballybay, County Monaghan. By this circuitous route we plan to reach a little literary and music festival tomorrow. But God knows. 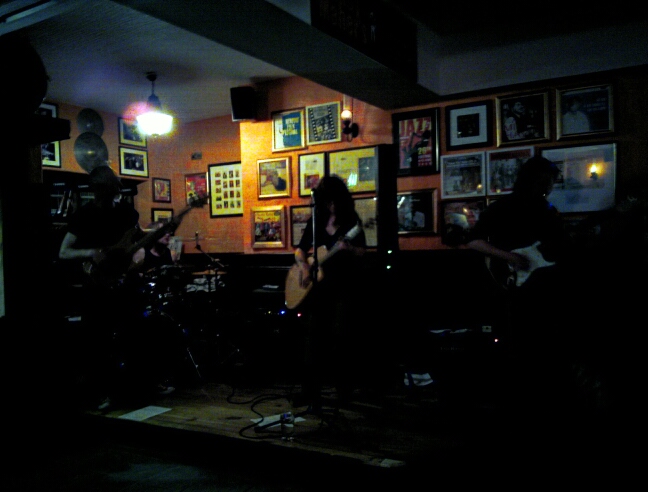 I’m sorry, I begin so many of these posts by describing where I’m eating. It seems like the only opportunity to write I get these days. Today particularly – I was working flat out from ten-thirty till seven, with only one brief break for a coffee and a banana.

But I’m making up for it now. A plate of sushi in Wa Café, the other Japanese place in my neighbourhood. Excellent nigiri here. I’m no connoisseur of Japanese cuisine, but sometimes it just tastes better than others. I particularly love the mackerel. I don’t think I’ve ever had raw mackerel in sushi before – or indeed, in any circumstances – and so perhaps it’s not traditional, but it was exquisite. There was salmon and tuna too. No squid, octopus or prawn, but that’s perhaps as well. I think I enjoy the idea of eating those more than the actual experience.
So tired…
Anyway, my new project. I am rescuing a net café. Yeah I’ve fixed computers before. This weekend, while other folks go about their religious observances, I must try to raise a whole roomful of the beggars from the dead. I will be Computer Christ.
It’s a biggie. Basically this net café started out with a healhy stock of twenty computers. Inattention over the quiet winter months has seen this dwindle to just eight… And as I mentioned, tourism has picked up of a sudden. They need functioning machines to coin money with. So twelve computers in one weekend. Can it be done? Well I got four done today and it’s a long weekend, so if I can keep up that pace… 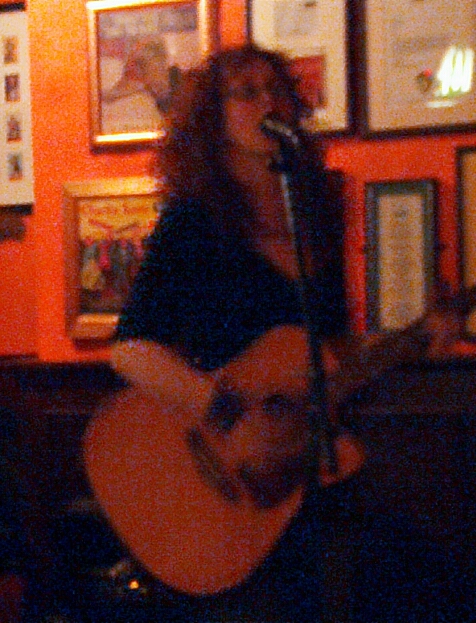 Fuck what a sound! Sorry. Since I started writing I’ve drifted down to the new blues bar in Wood Quay, Muddy Maher’s (where the Stage Door used to be) because I heard some friends were playing. The Prodigal Blues band: Niceol Blue, Mark Molloy et al. I just heard them warm up there, and was impressed. Reminded more of Led Zeppelin than anything else. Niceol is sexy like Robert Plant was sexy, but with the considerable added advantage of being a girl.
This will keep me awake until bedtime.