The world is puzzled by how passively we have borne the gambling losses of the super-rich. Where are the marches, where the strikes, the riots? Are we stoic or fatalistic? Have we internalised the blame for the bankers’ catastrophe? Or is it, as some theorise, just too damn wet here to take to the streets? Whatever the reason, it seems that the Irish just don’t protest.

And then one of the super-rich is convicted in court, and people come out to defend him in their thousands.

The Irish just put personal loyalty above anything else – including the law? Well there may be something in that, but it is too easy to be a complete explanation. You need to see the perspective of people who believe, not totally unreasonably, that Sean Quinn was a kind of hero. For them the villain is Anglo Irish Bank, Quinn its innocent victim, a decent businessman sucked into its corrupt financial web.

Were Anglo villains? Absolutely. Not the only villains, it must be said. Virtually every financial institution got greedy, took risks, and broke laws. But Anglo it seems were the most egregious of all. Yes, they were villains.

Was Sean Quinn innocent? Was he hell.

Their dealings together were so extensive that his interests and the bank’s were inextricable. His family borrowed something around 2.8 billion from Anglo. Two point eight billion. Just his family! The Quinn group of companies borrowed another one point two. Four billion is not the sort of money you advance to an unsophisticated innocent. Four billion is the sort of money that’s difficult to even conceptualise.

They were a good business empire I guess, as business empires go, that got involved with the boom mania. They spent money to make money, and then borrowed to make even more. It is sad and unfair, yes, that a family that put decades into building a vast fortune can lose it all to some bad decisions. But they made those bad decisions. He created thousands of jobs, but put them all on the line because of ambition. He took huge risks with borrowed money.

And his supporters know that of course. They’re in denial about it, but they know it. Their interests have also been his interests – for so long now that they overlooked the horrifically suspect relationship with Anglo. They turned a blind eye to things that should have been warning signs.

Sean Quinn was not personally responsible for getting the country into this much trouble, no. Perhaps he was one of the biggest single gamblers, but it took a hell of a lot of people like him, doing things like he did, to get the country into this much trouble. And if people can know this but still support him because he was their overambitious, risk-taking billionaire, then they have learned nothing. 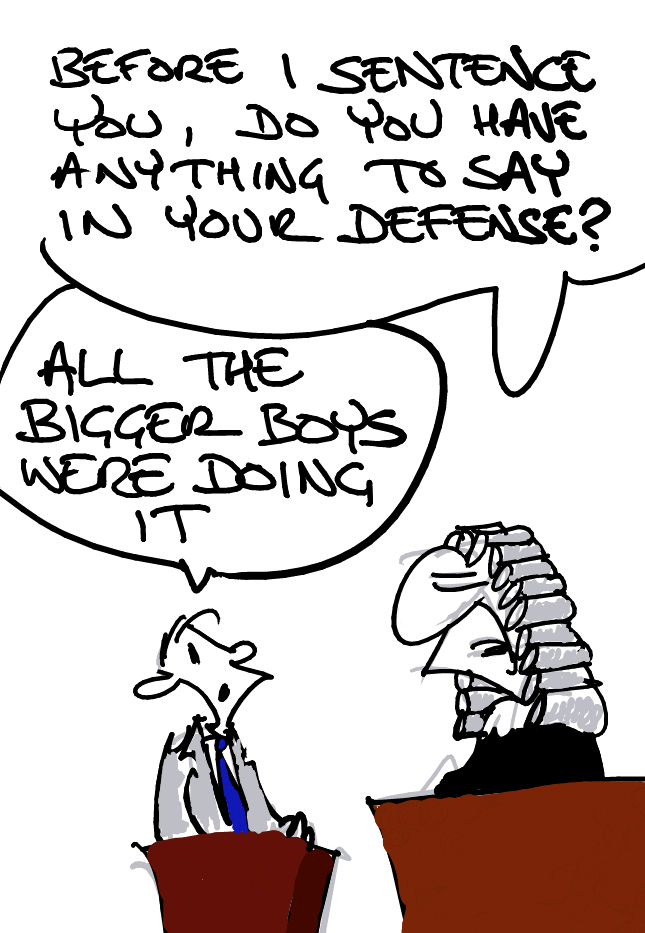 Ooh! Ooh! We got our report card! The IMF has checked out what we’re doing with all the money they lent us. Let’s start with a choice quote:

At around 40 percent of GDP, the cumulative cost of supporting the financial sector accounts for half of the sharp increase in net public debt in recent years.

That’s probably as close to saying “Basically they’d be OK if they weren’t a pit prop for Europe’s collapsing banking industry” as the IMF can allow itself to get.

On the bright side, people have finally been jailed over the billions that were ripped off the nation. Some of the bankers, right? Well no, some of the borrowers in fact. But it’s a start.

(Actually when I saw the headline “Sean Quinn’s son and nephew jailed for three months“, I assumed it was one person. Ours is not to question what goes on within a family.)

Sadly though the jail term is not for social larceny, but merely contempt of court. Which reminds me… Now cases are ongoing I probably need to scatter the word “allegedly” liberally through the following. But it seems that the Quinn family, having invested well but not wisely in the failed Anglo-Irish Bank, attempted to hide their assets from their creditors. Which, since the state has taken ownership of this mess, is us the taxpayers.

There was a stupid debate on the radio today, where a loyal follower of the Quinn camp came on to argue that the family was being persecuted. It’s too late to act like innocent dupes of the big bad bank though, when you’ve been caught trying to hide your money down the back of Russia.

It was a big bad bank however (allegedly, allegedly…), and the other recent good news from the fiduciary front is that Anglo’s erstwhile financial director has been charged with sixteen fraud offences. Sixteen. Imagine, a banker could actually go to jail.

But for how long? A friend of mine did an interesting calculation. A few months ago, someone received a six-year sentence for not paying VAT on the garlic he imported. Don’t say that’s harsh until you see some of the garlic we get in the shops; you’ll agree that hanging is too good for them. The penalty was so severe because the tax he evaded came to €1.6 million. Which establishes that sentences are proportional to how much you rip off the State. Interesting…

Not to despair though. What with prison overcrowding he’ll probably be out in just a few thousand.