American football is like rugby with all the bits I understand taken out. Admittedly that leaves plenty to be getting on with, but it seems to consist pretty much entirely of men charging directly at one another. That can’t be the most efficient way to accomplish anything. To make it even more confusing, when I tuned in no one was doing anything at all. I’d heard there were pauses in the play, but hadn’t expected them to last half an hour.

I gather though that the power cut is not an official aspect of the sport. Which is a shame, in many ways it seemed the best bit. Like the half-time show but with far more scope for improvisation. You’d think this would be cripplingly embarrassing to the Americans, having probably their most-watched event globally turning into an advert for inadequate engineering. Fortunately however they can all blame it on the political party they don’t support, thereby avoiding any conception of collective failure. Democracy in inaction.

Hmm. You know, I don’t think I should have eaten that leftover chicken. It’s a long time since Sunday, it hasn’t been in the fridge, and the weather has been heavy and humid. Bad for humans, great for bacteria. I had maybe better get to bed here. First have to congratulate Katie Taylor though, on looking set to be one of the first tranche of women to win Olympic gold for boxing.

I don’t like boxing. Sure, I loved to fight as a kid. Hell in the school yard having a fight was a way to get to know people. Talking for boys. But children aren’t strong enough to really hurt each other – adults are very different. A huge part of growing up is learning how to restrain yourself from resorting to violence. And most sports are exercises in this, diverting energy away from conflict and into competition. But in boxing, you just go at it. It’s like they took the basic idea of a ritualised substitute for conflict and said “Hey, let’s try taking out the ritualised substitute bit.” Yes it is a highly formalised, restrained version of fighting, but it still involves a lot of smashing your opponent repeatedly in the face.

Nonetheless it was ridiculous that women were not allowed to smash each other in the face, should they so choose, at the Olympics. You wonder what tortured logic was used to ban them from this when they were allowed to fight with swords and do distinctly more dangerous things. Boxing was just not ladylike. I’ll never understand how they could use that argument with a straight face and still let men figure skate.

Is that enough for you now?

It’s time we admitted this; Ireland is not a soccer-playing country. We’re a top nation at rugby, we’re way ahead at boxing, we’re number one in the world at hurling – and second only to Australia at Gaelic football. But at soccer, we are best at losing. Hell, we do better at cricket, a game most Irish people freely admit they neither like nor understand. We like soccer, we’re just – and there is no kind way to put this – really, really very bad at it. We got lucky once in 1990, scraping through to the quarter finals on draws and penalties. That was the best we ever did. It is the best we’ll ever do. We are complete and utter cock at soccer. If I haven’t yet made this clear enough, we are not good at playing the association football. OK?

So we should stop. Nobody makes us enter these international competitions, and we only embarrass ourselves when we do. Like Costa Rica with their army, we should be the first nation on Earth to disband their international team. The world will thank us.

But what about the fans? We are at least a great soccer supporting nation. Though only, and this is weird, on the international level. At the club level we’re hopeless. Top league teams in Ireland find themselves playing matches in front of a man, a dog and a boy. The average Irish fan spends far more on the merchandise of one of the giant English corporate teams than they do on actual, you know, soccer. (And perhaps this is the root of our malaise as a soccer-playing nation but you know what? I don’t care.) Yet when it comes to international games, apparently seasoned fans turn out in hordes. And they can really sing. OK, they only ever seem to sing the bleeding awful faux-traditional Fields Of Athenry, but they do it with gusto.

They could take up following a sport we’re actually decent at of course, but soccer is the great game, when it comes to the game supporting game. If you follow. They will still want to compete at that level.

So I say, why not freelance? Ireland’s greatest export has always been people, but they haven’t always been labourers, or construction workers, or nurses, or bankrupts. Ireland was once famous for her mercenaries. During times of economic downturn when we didn’t have enough war at home, people made a good living in foreign armies. I see the soccer fans fulfilling a similar role, for countries in dire need of some pizazz in their fanbase. Ones with more money than people – Luxembourg, for example. Liechtenstein. Monaco. It could be both lucrative and fun.

And at least they’d have a chance of bloody winning occasionally. 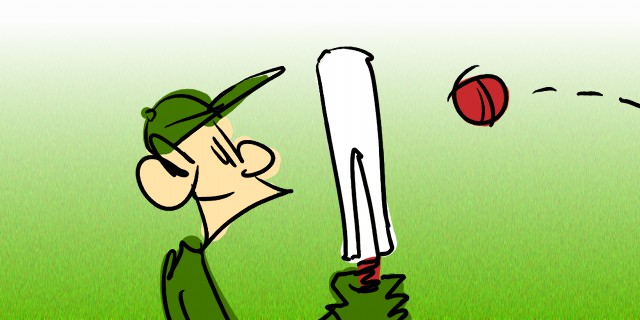 We won a game of cricket against England, in some sort of world championship thing. To the annoyance of Australians and Indians and so forth, most Irish people don’t even realise this is an achievement. Here cricket is a minority sport some oddballs play, like lacrosse or caber tossing.

It was St. Patrick’s Day. It was the climax of the rugby tournament. And water was banned.¹ Sounds like a dangerous recipe, yet it was the most good-humoured one I remember for years. Even Irish people were wearing green. Okay, it rained on our parade both literally and figuratively. The weather felt like being indecently assaulted by eels, and to lose the rugby after such a performance was magnificently tragic.²

But then came the cricket. Are we still on the same planet here? Ireland doesn’t beat Pakistan at cricket. You almost feel bad about it – what did Pakistan ever do to us? Most Irish people don’t even know what the rules are. So I thought it was my job to find out. I watched a game – or some of one anyway, they are pretty long – and this is how I think it works:

Cricket is played in a field. One team comes in to the field to field, which means they have to throw the ball and catch it. Sounds simple enough, but they can only throw it at the batsman who is actually on the other team, and has his hands full. Apart from the one who’s bowling (throwing), they stand around in a variety of positions that have names like silly mid-off, googly and teashop.

The batting team comes in, or on, to the field one at a time, and the bowling team tries to put them out, or off. You can put a batsman out by hitting the wicket (sticks) or catching a ball he hit, and you can put him off by insulting his girlfriend.

The batsman scores by running backwards and forwards, but only between the wicket and… another wicket, swapping places with a batsman at the other end. I’m not sure how he got there. They score one for every time they manage this before the other side finds the ball and brings it back, or an automatic four if the batsman hits the ball as far as it can go. Or six, if he hits it further.

Not so hard really.