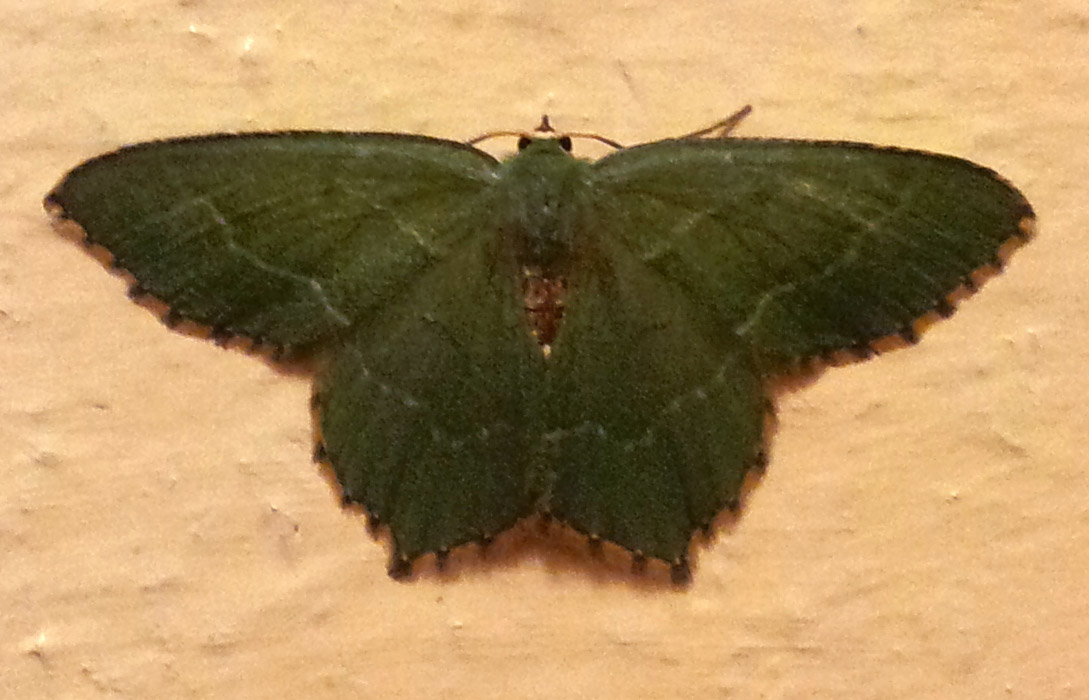 Found this odd little moth in the kitchen. It’s a little over 3 cm in span and camouflaged to look exactly like a leaf – I’d almost go as far as saying a hazel leaf. To the eye it’s lighter and more blue-grey than it seems to the camera.

After a little searching, I’m pretty sure it’s a common emerald moth. 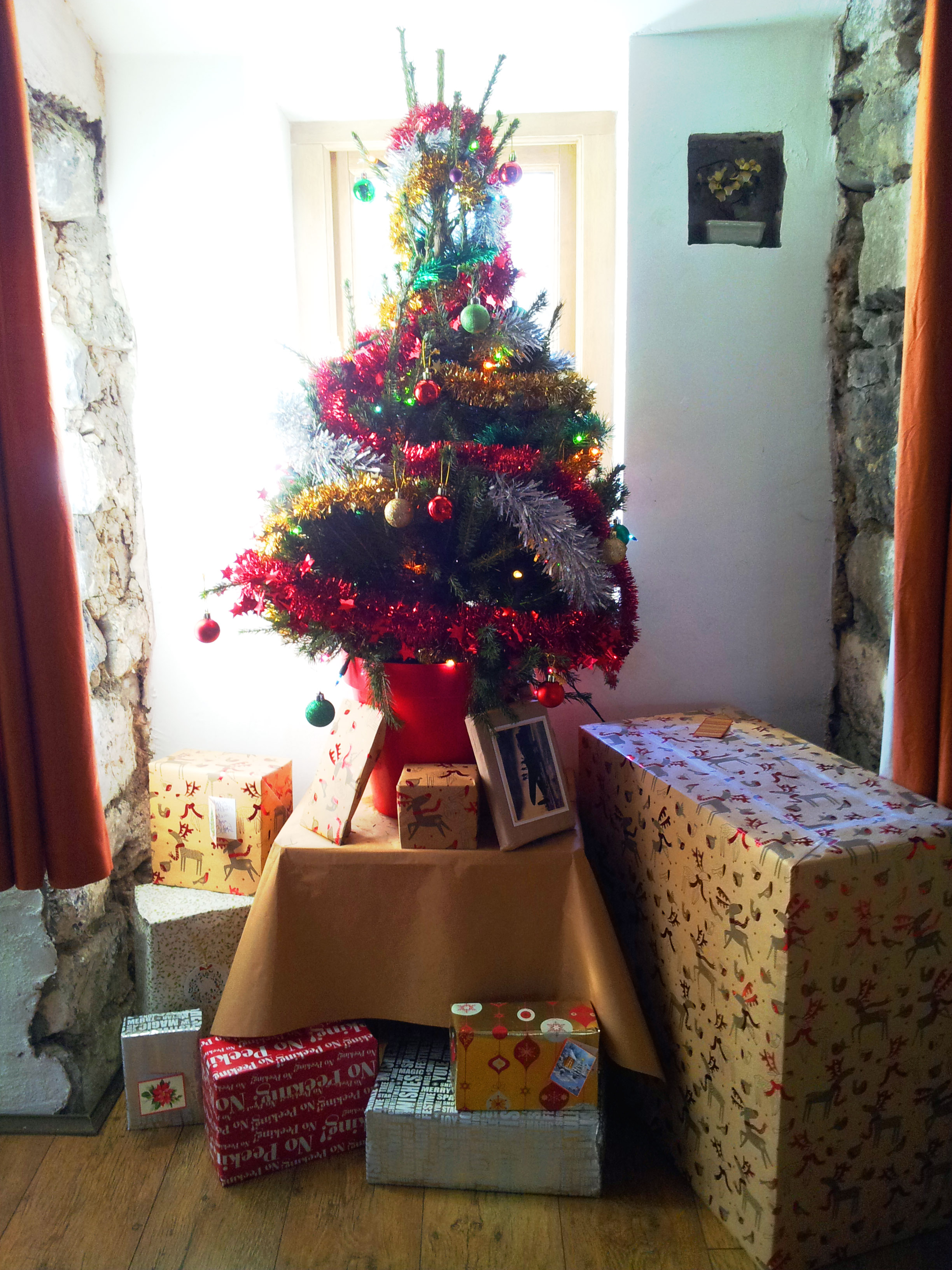 Well you know, the exams. And then all the things I had to put off because of the exams. But it came together in the end. To be honest I was so hopped up on exam adrenaline that I got shopping done before I knew it. Oh and there was a side project – of which more anon.

Anyway, this year’s tree ended up being modest but respectable. Though I should point out that the picture shows a miniature pine, not giant presents. We got one in a pot as this is more eco-friendly, and also easier. Assuming it survives it’ll be brought in at Christmas for years to come. Biggest problem will be resisting the temptation to leave the lights on it.

Well I hope all of you who celebrate Christmas – whether you’re actually Christian, or merely see it as an opportunity to give things to people you care about – had a lovely day. I’m going to sleep now. 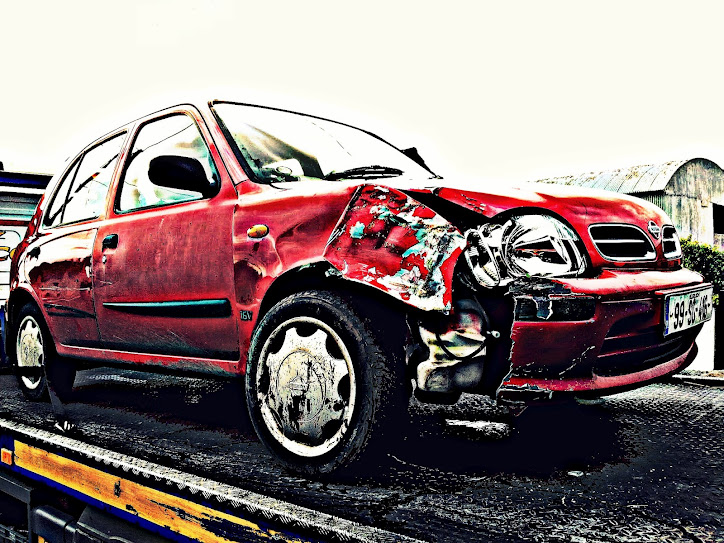 As if of its own volition, the car darts to the left. A skid? I know how to deal with that. Stay calm, don’t overcompensate. And yet I am lurching drastically to the right now. My feelings are oddly not of panic and fear but puzzlement, disappointment. The steering, something I’d come to think of almost as a direct expression of my will, had suddenly decided to have its own opinion. Parents of teenagers must feel like this, as their world spins out of control.

A ditch. No wait, a tree. A slow, sickening crunch. I’m athwart the driveway, nearly facing the way I came. But I’m relieved. That tree saved me from the ditch, that’s good. I’m a whistling kettle of shock and adrenalin, but I seem to be uninjured.

So what was that sickening crunch, exactly?

I turn off the engine. My glasses have flown off in the impact, I know not where, so I get out and inspect the damage without them. Even with the glamorising effect of soft focus though I can see it’s not pretty. The right wing is crushed like foil, the water tank displaced and leaking, the wheel… doesn’t look right at all.

My glasses turn out to be under the passenger seat. So, can I drive this thing? The engine starts. The power steering does move the wheels, though the noise it makes is like insurrection at the bacon factory. I select first gear, let out the clutch and…

Nothing at all. It’s a front wheel drive car, and the front wheels don’t. That… is probably not a good omen. The damage goes well beyond one corner.

What the hell just happened? I was on the driveway to Cregg Castle, an old colonial manor house that’s being converted into an artists’ residence. It’s covered in slippery mud. The drive I mean. It’s also pocked with holes so thickly that they’re practically impossible to avoid – indeed I’d just failed to avoid one seconds before the accident. Had I simply skidded on the mud, or had the impact broken the steering? It had felt more like the latter. And indeed the two front wheels pointed in different directions now, though of course that could be effect rather than cause.

Sudden steering failure. Imagine if instead of a driveway that had been on a main road. At 95kph, with oncoming traffic. It would have been almost certainly fatal, for me and for others.

And yet I find myself hoping it is the explanation. I mean, skidding off a driveway. That’s just embarrassing.

So first problem would be getting the car off the road. I was near the gatehouse and knew the people who live there; fortunately someone was in. We couldn’t move the car between us, but soon more people came down the driveway in both directions and they stopped to help. They pretty much had to, but I’m sure they would’ve anyway. Two women tipped the balance, and we got it lined up to the point where it could be towed off the road. Thanks to James, “Lorraine Micra”, and all the cooperative people from Cregg Castle. And to the couple who were just passing by to take a walk in the woods but offered me a lift without knowing my mother’s house was only a mile away.

Now it’s the next day. I’m a little achy, though that will be mostly from trying to push the car. I await the insurance report which hopefully will tell me what happened, though I expect it will also bring the sad news that the car is a write-off. The first car I’d ever owned – and that for only about two months. It wasn’t all that much of a car perhaps. A red Nissan Micra that had been my mother’s before me, and several other people’s before that. Thirteen years old, but a tough and feisty little car. Useful, pleasant, reliable – well, it was only unreliable once. I will miss it. I may well buy another like it; I don’t think the write-off value will cover the Land Rover I really want. I wouldn’t be all that surprised if it didn’t cover the excess. But I will need something if I’m going to college next month.

And you know what’s even more annoying? Literally the day before I was full of joy because I’d finally got my resident’s parking permit, the magic sticker from the city that means I never have to pay for parking near my flat again. Freedom at last! It’s almost like receiving full citizenship; finally I was a paid-up member of Galway’s horrendous traffic problem, and could park anywhere I liked in the part of town that has no parking.

But seriously, just taking the car into town for an afternoon had been costing me six or eight euros. Having it overnight was pretty much unthinkable. So since I’d got the thing it had continued to reside at my mother’s place. Now at last I would be able to make proper use of it.

Oh well. Taking a bark rubbing with your front end is another way to avoid parking fees I suppose. But the irony, it is bitter.