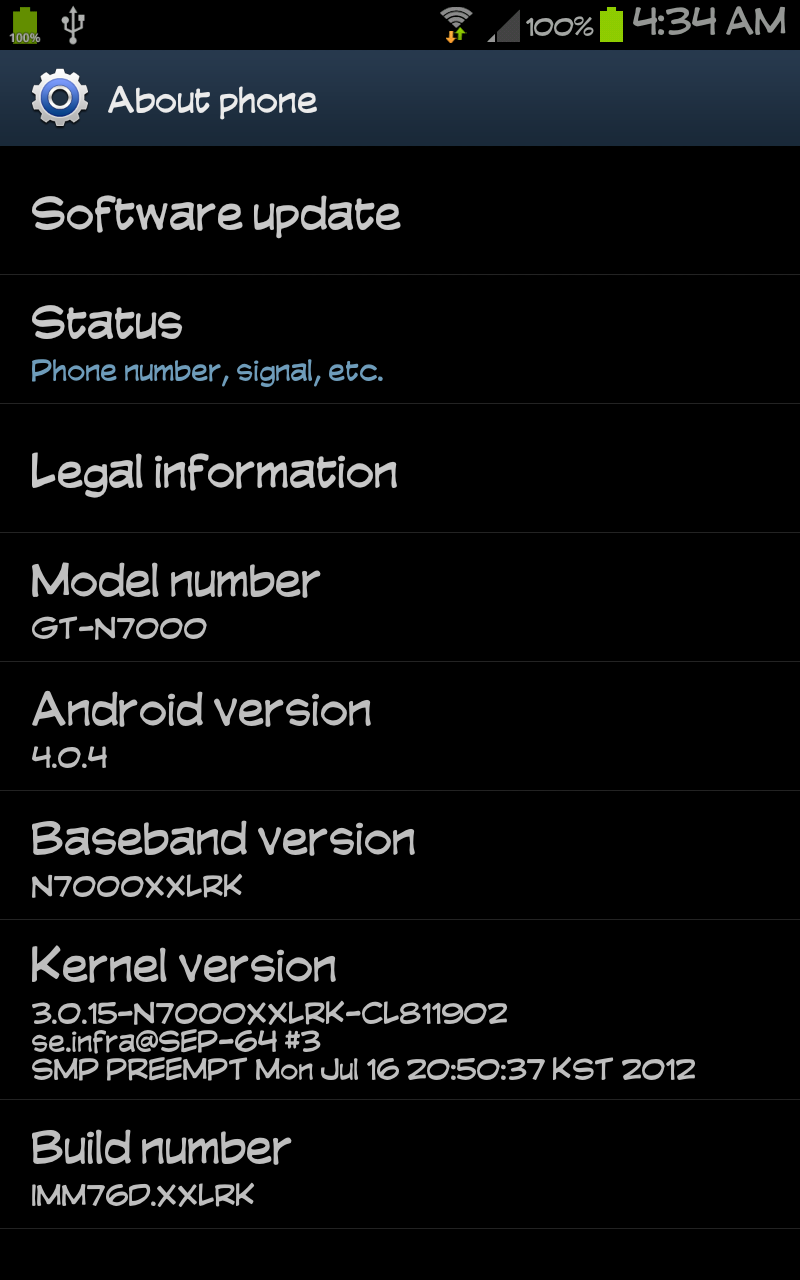 Oooh, this isn’t supposed to happen.

You may remember a while ago I got fed up waiting for Vodafone to upgrade my phone’s “firmware” – that is to say, send out the newest version of Android. Google makes Android of course, but then the various phone manufacturers adapt it to their hardware. Finally the networks add their own modifications and extras.

If they can be bothered, it seems… Samsung took ages to get Android 4 (Ice Cream Sandwich, as she is known) ready for their Galaxy Note, and now it’s taking Vodafone Ireland months more to pass it on to us. Why? 02 Ireland released it in June. What the hell are Vodafone doing to it?

My guess would be putting in some awful advertising-partner crapware the customer is going to revile, but perhaps I’m too cynical¹.

So customers are getting increasingly pissed off – witness the acrimonious thread brewing on their support forums. Phones with the next major version of Android (4.1, or “Jelly Bean”) are beginning to hit the market, and we’re still waiting for 4.0. Myself I gave up on them, and did the upgrade at home using a non-Vodafone version of the firmware and some wood glue². All went well, except the program that’s supposed to look after all this took umbrage, and ever since has been curtly displaying the message “Your device does not support software upgrading by Kies”.

And yet here it is. Upgrading.

I don’t know whether to be excited or worried. It’s like being told that you’re getting a present, but that it first has to be extracted from your bottom using a corkscrew. Samsung’s “Kies” phone management software is, as I’ve mentioned before, an unhappy thing. I’m already on the second attempt here. The first time it spent about half an hour downloading the files for the upgrade. Once that was finished, it told me that it couldn’t recognise the phone and to restart it. Whereupon it begins to download those files all over again… That’s just basically idiotic, isn’t it?

And I don’t even know what this upgrade is. I’m just hoping that it’s the official Vodafone release of Android 4, including the “Premium Suite” of special Galaxy Note apps (and Angry Birds Space!) that Samsung promised in recompense for their part in the delay. ln theory that shouldn’t happen – you get updates to the version you have, not the one you’re meant to have – but I don’t know what else it could possibly be. Can’t wait until the download completes.

OK I fell asleep – after yet another failure and restart. But in the morning, after a few more restarts of both phone and PC, it finally worked.

The mystery update turns out to be not Vodafone’s build, but an upgrade to the generic one – from 4.0.3 to 4.0.4. Still no sign of the “Premium Suite”, which I expect will only come through the network. If it comes at all. At this point though I’m beginning to wonder if I want to get back onto Vodafone’s update stream, if people there are still stuck on Gingerbread (2.3) while I just got an update before I even heard it was available.

So what’s new? Performance improvements is all really, especially to the camera. Otherwise little major except… I almost daren’t say this for fear of seeing these words vanish before my eyes, but Google Chrome actually seems pretty stable now. That is devoutly to be wished for.

Mostly though, this is a polishing releases. Good and all, but not terribly exciting compared to Ice Cream Sandwich which pretty much made the Galaxy Note complete as an extraordinary cross between a phone and a notebook. It is the most useful device I’ve ever owned – a phone in my pocket that can do virtually everything I’d otherwise need to carry a PC or netbook or tablet for – and I’d recommend it to anyone.

Just don’t get it from Vodafone Ireland.

But first the good news: The Samsung Galaxy Note is finally available in Ireland, from Vodafone.

The mixed news: It’s pricey – ranging from €100 up front on a 24-month “I wish to buy all these airwaves” heavy use contract, to €300 if you only want to be committed for 18 months. That puts it on a level with only the iPhone 4S.

The medium news: Maths is hard. Or to be precise, arithmetic is tedious. But having hammered through nine different contract options, amortising the down payment to try and figure out which is really the best value, there is one inescapable conclusion. They’re all nearly the bloody same. The most expensive one has five times the minutes, ten times the texts and twice the data as the cheapest – but only costs a third more a month.

But will I need all those extra minutes, or can I save that third off the price? Well that really depends on how much I use now. And my current carrier O2 doesn’t put all that information in one place, so I have to go extracting it from each month’s bill… And of course it’s not presented in terms of what you actually used. Oh no, that would be far too simple. Unless that is you want to get it from the downloadable Excel spreadsheet – where they put your spend on voice, text and data all in a single column, so rendering it it ****ing useless.

What appears on the bill is how much you were charged for exceeding your allowance in that month. To work out what that means in terms of usage you have to divide it by the price, and nowhere on the site does it seem to say anymore what the tariffs for excess minutes, texts and data are for my contract. So I have to figure the pricing out from the spreadsheet – factoring in the VAT of course. And this still tells me nothing about the months when I was under my allowance; that I have to extrapolate from the bell curve (i.e., guess). Gaaaaah. My brain hurts. Shopping for toys ought to be more fun than this.

They do it to make their customers stay. We know that we might get a better deal somewhere else. We just can’t tell where.