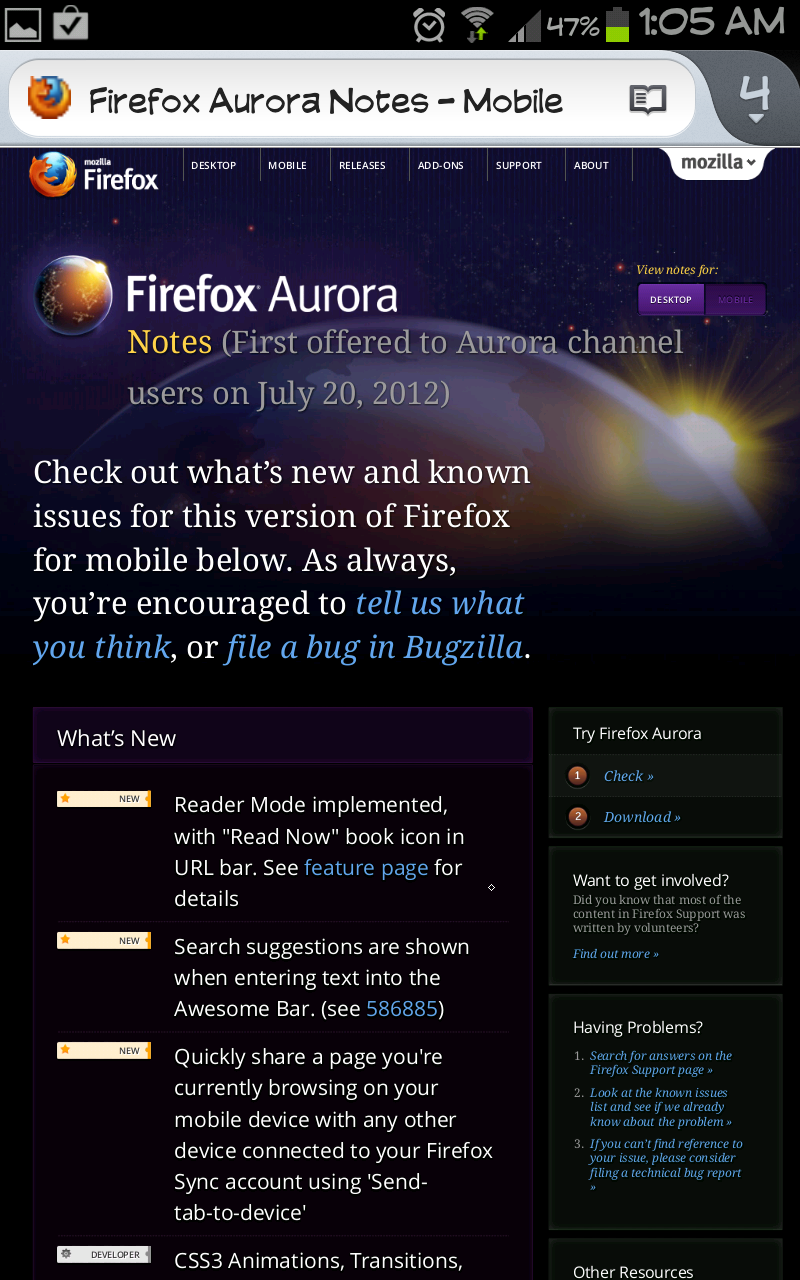 Have you heard of Aurora? This is basically Future Firefox, an experimental version of the great independent browser from Mozilla. Not a beta, because it’s not a test version of a coming product; more a testbed for ideas that might be included soon.

So you can’t say every feature it displays will end up in Firefox. Some though I’m pretty certain will – at least when it comes to the Android version. Particularly the way Aurora now responds to hover events, so things like dropdown menus work when you pass a mouse pointer over them.

What should I care, you may ask, when my phone doesn’t have a mouse pointer? Actually it probably could… A lot of Androids will let you plug in a mouse (and indeed a keyboard, external drive, or other peripherals) if you use a USB host adapter, and there are Bluetooth mice too. More importantly though, it helps Android adapt to a greater variety of hardware: tablets with and without pens, laptops, even desktop devices. I have no doubt that in a couple of years Android will be seen as a serious alternative to Windows for a lot of work situations.

Another good thing about this desktop-like ability in a browser is that it helps close a gap threatening to open between the desktop and mobile Web. Sure, mobile sites have their uses, especially on smaller screens. But they will nearly always be simplified versions offering less control, and it would be hugely frustrating if your browser wasn’t capable of switching to the full version when needed.

And certainly, no one should ever be forced into using an app just because their phone can’t handle a website.

My new default browser then? Nope. Aurora is in no way intended for primetime. It has some really weird bugs, a predictable consequence of throwing in new features to see what happens, and quickly becomes frustrating to use. But proper Firefox for mobile is pretty good. It has perhaps the most attractive look of any Android browser, and it’s been very stable. Certainly try this. Or if you want to be a bit brave, there’s a good beta version that has some of the more stable of the new features.

But if I praise Mozilla here, it’s with faint damns. The reason I’m so certain this feature will make it into Firefox for Android is that every single major rival has it already. The standard Android browser, Chrome for Android, Dolphin HD, even Opera Mobile.

All of them have their own foibles and bugs too; desktop-class browsing on a phone is obviously no walkover. Opera I regard as too eccentric to be really usable now. Try to upload an image with it, for example, and it will use its own non-graphical file explorer instead of Android’s image gallery. How many of your photographs do you know by name? Dolphin is a browser designed exclusively for mobile devices and there is a lot to recommend it, but it feels more orientated to smaller screens. The Android native browser gets better all the time, and now features a full screen mode and a thumb-friendly menu system, but can seem a little flaky.

The leader still though is Google’s Chrome for Android. I’ve raved about it before, so I’ll restrict myself to happily reporting that its chief weakness – a regrettable tendency to crash if you look at it sideways – does seem to have been fixed in Android 4.0.4.

It’s maybe not surprising that Google’s product is doing well. It’s got Google’s money behind it after all, and Google’s ambition. But Mozilla have their own ambition now, and though it’s been taking them far too long, they do look to be on their way to producing a serious mobile contender.