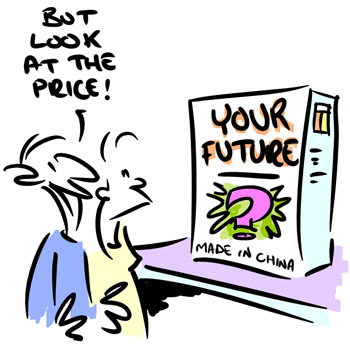 We send them money, they send us more or less everything. Simple.

Actually there’s a lot more to it than that. It may seem that our money is going there never to return (except in the form of loans and – perhaps – investments), but China’s increasing wealth is little more than a side-effect of the highly integrated role that it now plays in the world economy. China is a machine for transferring wealth all right, but while some of it goes to the rich in China and some even goes to the poor there, most of it flows from our poor to our rich, here in the West. It’s the great money pump. As such it plays a very useful role in the destruction of democracy, by democracy.

Think back to those far-gone days when Capitalism seemed to actually work. Owners of businesses would employ people who would then be able to buy things from businesses. It was a two-way street and it worked well enough. The owners arguably got more than their fair share and working conditions were downright dangerous in the early days, but overall it was a benign circle where people saw their incomes rise.

It began to fail only when everyone, more or less, had a job. This meant that the labour supply was no longer an endless resource, and that very much strengthened the position of the “working class” in their campaign for a bigger share. Labour was still a renewable resource though, so at this point things might conceivably have reached an equilibrium. But capitalism is driven not by profit, as you might assume, but by increasing profit. Its most powerful members after all are not those who create wealth, but those who have it already. Investment will go not to what might make a sustainable economy or society, but to whatever can return the biggest immediate margin.

And one of those things was China, where labour seems again to be in infinite supply and working conditions can be just as dangerous as the good old days. Now instead of paying people in their own countries, businesses can pay people in China to make things to sell to the people of their countries. As owners of the patents, the brand names, the “intellectual property”, they still get the lion’s share of the profit from these Chinese-made goods. The transfer of wealth thus becomes a one-way street, from the poorer to the richer in our society, with China merely taking a commission as agent.

Most people in the West are still employed of course, but more and more they’re employed in secondary jobs that have little control over the production of actual saleable goods. I don’t think government is ever going to be brought to its knees by a mass stoppage of supermarket managers or Web designers. Robbed of this bargaining chip, people’s incomes are falling in real terms. It’s just that we don’t notice because the cost of many goods is rapidly falling too – thanks to them being made in China. It’s the tasks we cannot effectively outsource – health and education for example – that show how the real wealth of our society is decreasing.

Thanks to China. the rich no longer really need the rest of us as much as they once did. Which explains why the wealth gap is rapidly increasing. So China does turn out to be a threat to democracy, if not in a way that anyone expected back in the Red-Scare 50s. My question is this: If we encourage Chinese investment here, will it help us focus on finding solutions to this very dysfunctional relationship – or will it simply buy our silence?

The 9/11 attack was brilliantly simple in its planning. All it required was a little organisation, and the mental capability to slaughter thousands of innocent strangers. Brilliantly successful too; its objective, to foster conflict between the West and Islam, seems to have been largely realised. Yet ten years on, a significant proportion of people insist on believing a far more complex explanation: That 9/11 was faked, not an attack but an inside job.

I say a significant proportion; it’s far from a majority, though any time at all spent on YouTube might persuade you otherwise. (One wide-ranging poll did find that less than half respondents thought that Islamists were responsible, but that survey included many people in Islamic countries naturally unwilling to be associated with the atrocity.) A 2007 Zogby poll (PDF) sponsored by conspiracy theorists themselves found that something approaching a quarter of Americans thought that elements within their government were complicit in the attack. This figure has probably dropped somewhat since Bush and Cheney left office peaceably, but there is still a sizeable minority – of Americans – who believe the US government was complicit in or even responsible for the most deadly attack on America in its history. Why?

I say ‘insist on believing’ because it takes an effort of will to decide that America was responsible for the attack on America. Even the ‘moderate’ version – that forces within the US government were merely complicit in the attack – asks us to believe that members of a Republican administration were willing to stand by and allow a devastatingly effective attack by genuine terrorists on the heart of America’s commercial interests, because they believed they could gain by it in some way. More ambitious theorists would have us believe that they blew the towers up with carefully set demolition charges, then flew planes full of passengers into them merely as a distraction.

Why do so many people, both Americans and their enemies, persist in this? Well, they have one telling thing in common: Both need to believe in the strength of America. For its enemies, the idea that a tiny terrorist outfit can wreak such destruction simply doesn’t fit with the image of a Great Satan.

By the same token, the Americans who think their own government destroyed the World Trade Center in order to make war and profit are patriots. They still believe that the one power on Earth capable of inflicting such terrible damage on the US could only be the US itself. These conspiracy theorists are not cynics. On the contrary, they have faith in America.

So those young anarchist protesters ten years ago were right, globalisation did bring devastation and exploitation. Not to the Third World though. It actually turned out to be quite a treat for a lot of people there. In Europe and the US however, it has led pretty much directly to the collapse of democracy.

In particular of course, people who aren’t the descendants of generations who fought for better working conditions, better wages, and democracy. Bluntly put, the work conditions and democratic freedoms enjoyed in the West were created when wealthy people needed a great deal of skilled and unskilled labour.

Conditions for the poorest improved suddenly and drastically at only two times during Western history. The first was after the Black Death. That decimated the peasant labourers, but it meant that afterwards there was a shortage of them. They could reject the previous conditions of their employment, which were more or less slavery, and start bargaining.

The second time was in the late 19th and early 20th centuries, when the Industrial Revolution created renewed demand for labour. Conditions in factories were of course horrific at the start when the supply of poor people exceeded the demand, but that turned around and labour was able to organise and gain much safer conditions and better wages. Ultimately, it gained political representation and universal suffrage.

Easing up conditions of trade with the rest of the world has completely undermined the position of the workforce – right up to the most skilled. Yet at the same time it has created new opportunities for business. With plunging labour costs, profitability has generally soared. But the tax base of most Western countries is not the wealth of business owners. To say the least, these are the people who can afford not to be taxed. They can afford the accountants. They can afford the lawmakers. So the tax base is collapsing. The countries of the West are simply running out of money, one after another.

But what can we do? It seems too late to introduce protectionism. The only option is to extract more money from the people who profited by exporting jobs – the corporations, and in particular the super-rich personally. But all the major political parties clearly do not dare to, they are helpless in the face of wealth.

Welcome back to serfdom.