So why the hell don’t the opposition just get this horrorshow government over with? Why are they dancing around trying to get the Finance Bill passed before the election?

Well it’s not to please the EU, even if they all say it is. It’s not even to calm the markets, entirely. It’s mainly so that the election doesn’t turn into the most vicious, unpredictable free-for-all in the history of the State.

It’s a fantastic political situation. The thing is, everybody hates the Finance Bill. Even the government (if one can still call it that) who wrote it hate the Finance Bill. Certainly the people are going to hate it. It isn’t the sum total of the EU/IMF bailout cuts of course, but it’s enough a part of it to stand for the whole. It will be hugely unpopular politically. So why don’t Labour and Fine Gael kill it dead by bringing down the Taoiseach?

Because of this: If the election is not fought after the Finance Bill, then it will be fought over the Finance Bill. And that will be a gift beyond price to the parties who are willing to campaign on getting the EU/IMF agreement torn up: Sinn Féin, the United Left Alliance, the almost uncountable array of non-party protest candidates that will spring up. If enough of the vote goes to them there will be no possibility of Labour and Fine Gael forming an administration – not at least without some very unwanted help.

So watch, as in the next few days and weeks all the major parties go to enormous lengths to express how much they abhor the bill, while at the same time trying desperately to get it passed. Labour and Fine Gael will want to add softening, voter-friendly amendments. This too will be fun, because they will on the one hand be trying to show they can cooperate (to undermine the desperate FF refrain that they won’t be able to govern together), on the other desperately competing to be the party that hates the bailout most. They will attempt to do this without looking foolish, and they will fail. It’s going to be hilarious.

And to make it worse, if they succeed in reaching a compromise this may present Fianna Fáil with a last minute opportunity to reverse their fortunes. It’s conceivable that a version of the bill could be passed without FF votes – enabling them to present themselves to the electorate as the one party who were against it!

Too cynical, even for Fianna Fáil? 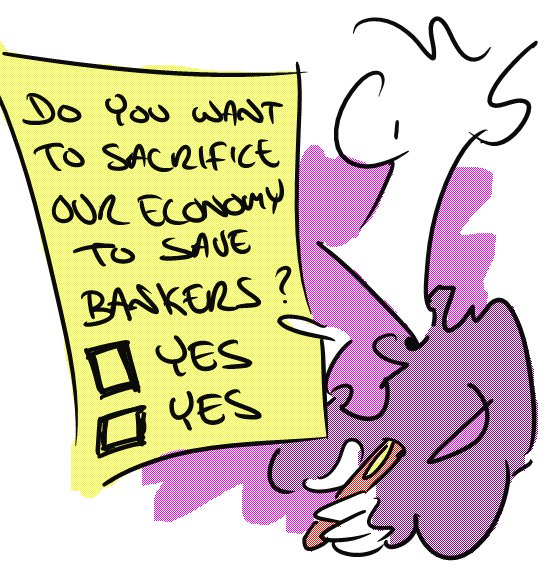 So I was wrong? Not at all. You see, the main political parties read this column and – forewarned of the dire alternative – got their shit together.

So Fine Gael and Labour presented Fianna Fáil with an ultimatum. Where they really ready to go to the country without the Finance Bill being safely finished? Well, they were ready to act like they were.

And I’m sad really. Because if we had the election first then it would effectively be a plebiscite on the Finance Bill, and thus the EU/IMF bailout deal. You may fairly say that is not what an election is for, but when all the major parties favour one course of action and want to present us with a fait accompli, then I feel rebellion coming on. Politicians should not be ganging up against the public.

But not to despair. There’s still plenty time for operation Stuff The Finance Bill Down The Nation’s Neck to go horribly, hilariously wrong.