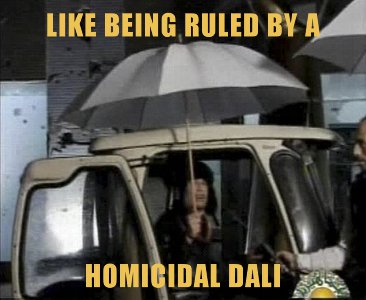 I really need to stop confusing Ban Ki-moon with Sun Myung Moon. It’s making the news seem very odd. At least though the UN Secretary General (not the businessman who says he is Jesus) gave an unequivocal response to the massacres in Libya. Our own government still seem to feel there are pros and cons to gunning your own citizens down en masse. It’s probably just as well that they’re resigning power next week.

Unless that is they’re looking at Qadhafi’s dogged approach to politics and thinking “Well, that is another option.”

You may think there is little connection between Ireland and Libya, but the world can be astonishingly small sometimes. Yesterday one of the candidates running in next week’s election lost his brother to the fighting in Benghazi. In fact three members of Ireland’s Libyan community have lost family members so far, a statistic which hints that the number of deaths may be much higher than reported.

The Belfast Telegraph reports that a Dr Ibrihim El Sherif and about 60 Libyans delivered a letter to the Department of Foreign Affairs yesterday, urging our government to condemn the violence.

“We want freedom. We want justice. We want freedom of expression, we want the freedom that we can go to the ballot box like the Irish people in coming days,” he said.

Come on, Libyans. You can do better than that. You’ll only get the same freedom at the ballot box as the Irish people if (a) your uprising turns out to be led by people who are fundamentally conservative, (b) they take control, but then immediately have a civil war between the very conservative and the very, very conservative, and (c) every election for ever after is basically just a choice between one of these nasty, small-minded factions and the other.

And really, what are the odds of that?

That reminds me – found out that one of the Fianna Fáil canvassers I swore at yesterday was the great-grandson of revolutionary leader Éamon de Valera himself. Dev the One-Eighth; I feel like I’ve been touched by mediocrity.