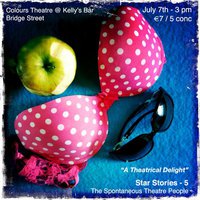 Liveblogging from a show. Not sure about the etiquette of this, but I’m being dreadfully discreet.

Órla McGovern is not an elderly working class Dublin widow with a naughty sense of humour, but she plays one perfectly on stage. Niceol Blue – whom I’ve mentioned before – really is a singer-songwriter born in one of those Bible-belt US States you only run away from. They make an eclectic partnership, and form the core of The Spontaneous Theatre People, a company that devises plays.

The show is about stories. About stories about stories. The actors play storytellers, playing characters. One enchanting tale, told by Zita Monahan, is of a woman who was hairdresser to an international spy. Another was about an unhappy wife who went into space, launched by… But that would give it away.

I’d tell you to come and see it, but it’s a run of one performance. You can catch it though at the Electric Picnic.

Thanks! You can find us on facebook and also http://www.spontaneoustheatre.com