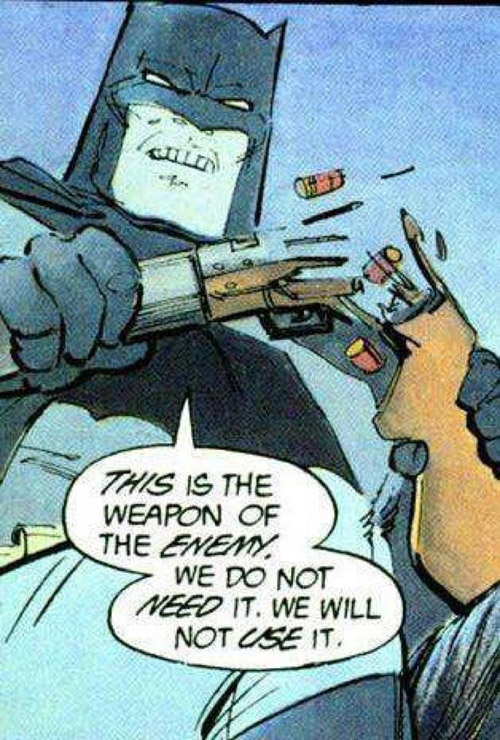 We will not go hungry for irony today. Many people have reposted this picture (©DC Comics without permission, but I don’t think they’ll object), reminding us that a central pillar of Batman’s character was that he considered guns to be intrinsically evil. When they are used by unbalanced individuals to massacre helpless, trapped people – and used that way over and over and over again – you can see his point.

But what can be done? US gun control is an intractable situation for two reasons:

A classic example of a problem that, by the time you realise it is a problem, has already gone too far to do very much about. Armed people are defensive people. Indeed, paranoid people. Why wouldn’t they be? Everybody’s got a gun.

To sum up an entire worldview in one sentence: They need guns to prevent the government taking their guns.

How did it happen? We tend to blame the US Constitution‘s enshrined right to bear arms, but that’s really a red herring. Plenty other countries considered gun ownership a right without it leading to this. America’s peculiar gun culture has its roots in the middle of the 19th Century. Before that, firearms were not considered a social problem because only the ruling classes could afford them. Mass production began to bring down the cost, but in most countries there wasn’t the demand. Why would most law-abiding people need a gun? The US though was unique in that it combined the industrial revolution with a frontier society. Demand was higher, prices lower. Guns became a mass-market commodity.

This is the reason why the United States ended up an armed camp. Not any sacred passage in the US Constitution designed to prevent government oppression, not ideals or the pursuit of liberty. Market forces. Guns were cheap.

Well young Swiss men are required to take basic military training and afterwards are required to keep their rifle. Though that was due to the latter of the two world wars. So the Swiss would be able to mobilize a sizable army in a matter of weeks
by European standards. Also the wording on the bill of rights is a bit odd… http://www.youtube.com/watch?NR=1&v=zsMaN7mdSWs

Of course in Switzerland the State owns the guns, and controls the supply of ammunition. A head-wrecking situation, I imagine, for the average NRA member.

I remember the first time someone went on a murder spree in Switzerland with their military service gun, in the early 90s. I was in the country at the time. People were shocked and confused. They just didn’t believe that something so… un-Swiss could ever happen. They’d had assault rifles in the home for decades without incident. But anywhere there are powerful weapons available, sooner or later someone mad is going to get one.