Some more photographs of our mystery bee-wasp, which I think will clinch its species. The puzzle only really begins there however.

Here from the back, it’s difficult to distinguish Hasdrubal from a honeybee. With her deep brown abdomen you can only just make out the wasp markings. Lookit her little stinger! You can hardly see that with the naked eye. Which is perhaps as well considering how much I had to handle her. 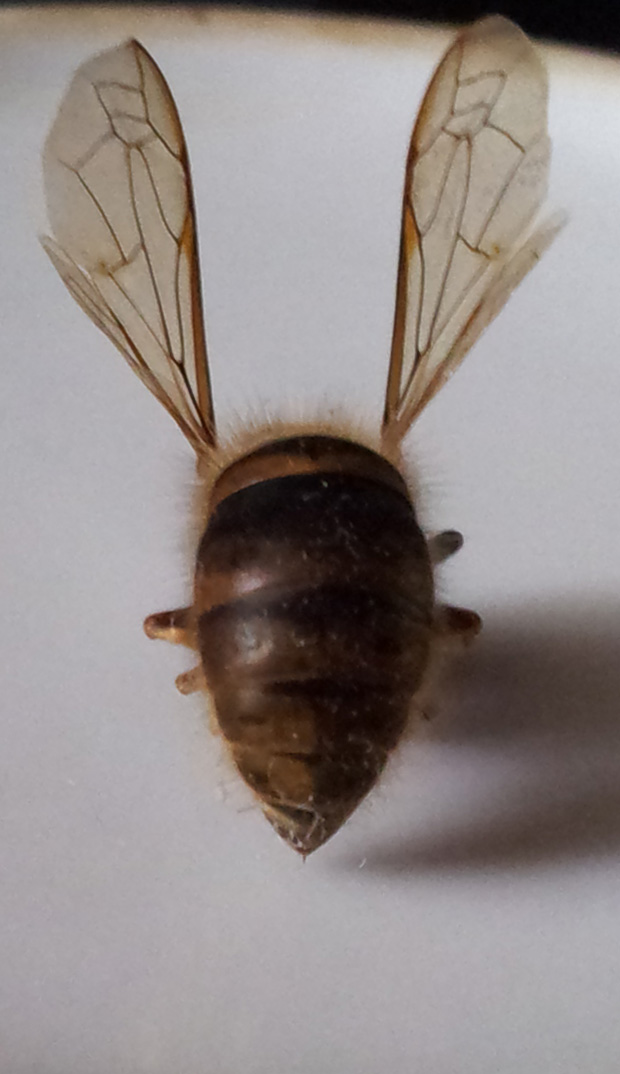 Sorry about the soft focus incidentally, this was really pushing the Note’s 8Mpx camera to its limits. Though I have to admit it’s not technically impossible to take sharp close-up pictures with it, merely humanly difficult. Depth of field becomes negligible while shake is amplified.

From the front it’s a different story, there’s zero doubt that this is a wasp. The face is absolutely typical. As are the antennae and slender legs.

And, incidentally, the hair. In my mind wasps are as smooth as spray-painted steel, but this research has shown me that they’re really quite fuzzy. I guess it’s the (normal) black-and-yellow markings; nature’s alarm signal makes you oblivious to a wasp’s cuddlier aspects. Or at least keeps you too far away.

We also see where H.R. Giger got a lot of his inspiration. Brr. 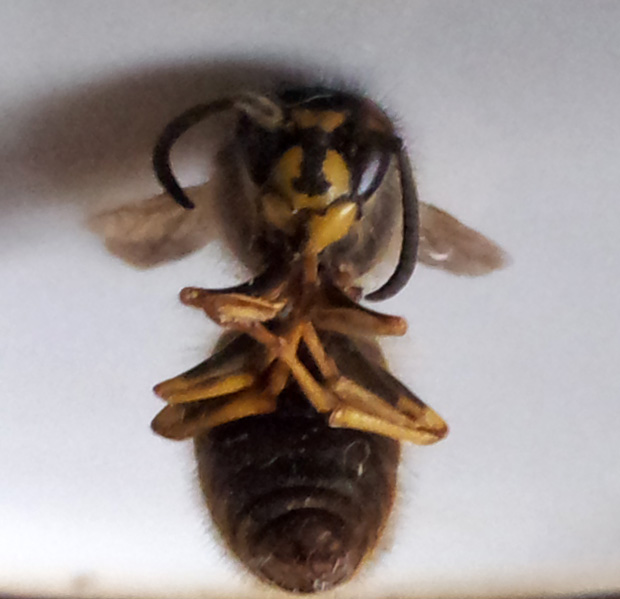 What species of wasp though? Thanks to Bruce Ruston of Blue Platypi Photography who sent a link to this great wasp ID chart, I’m almost certain that Hasdrubal is a common wasp. She has the distinctive “anchor” on her face. The only other variety that looks a lot like this is the red wasp, but its thorax markings are quite different – as we see in the shot below. 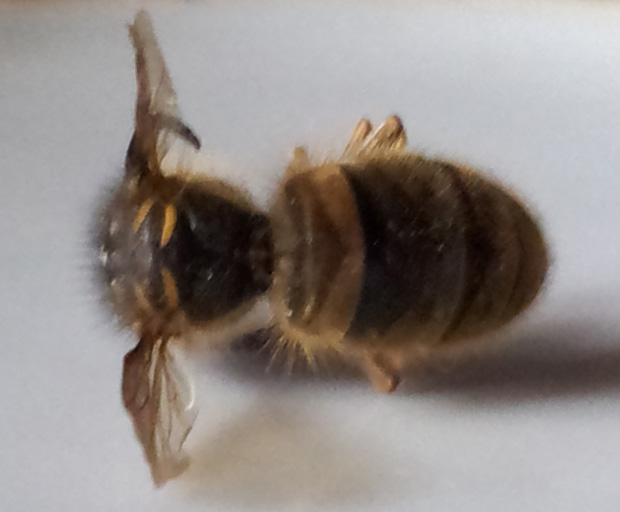 So Hasdrubal is almost certainly a common wasp – except she’s simply the wrong colour. The question then is whether this falls within the normal variation of the species, or if she’s some sort of freaky mutant.

That it’s possible to get tolerably sharp macro shots with this camera is demonstrated by this final one, in which I thought to ask Hasdrubal herself what sort of hymenoptera she is.

Any entomologists in? I came across a curious thing. The rest of you, don’t scroll down if close-up pictures of stingy insects disturb you. Or indeed offend you – it is naked after all. And dead. I really wouldn’t look.

OK now the wusses are gone, what do you think is going on here? It’s a wasp, coloured like a bee. Definitely vespine in its shape and features, with the pronounced segmentation and aggressive I-am-nature’s-attack-helicopter angles. But instead of the usual biohazard yellow it has the warm goldie-browns of a honeybee.

Well, makes a change from all the cartoons you see of bees coloured like wasps.

I don’t have a camera for macro photographs, but got surprisingly good results with the phone. The problems were holding it steady and getting the background right. In the end I put it in a glass jug; this gave me something to rest the phone on and allowed me to shoot over different surfaces. As the phone compensates to keep an average brightness, the creature looks a lot brighter when shot against a dark background. (I could’ve tried different camera apps that allow you to meter light more precisely, but this was quicker.) In the first one here therefore it actually looks a lot more yellow than it really is, and so more like an ordinary wasp. But it brings out the detail well.

White backgrounds on the other hand make Hasdrubal – I call her Hasdrubal, for reasons which remain unclear to me – look virtually black. The woodgrain one to the right (taken without benefit of the jug) probably gives the best impression of how she appears to the naked eye. If anything, a little darker than a honeybee – but with similar golden hair.

Which is the odd thing. Whoever heard of a hairy wasp? Bees wear a fluffy bolero but wasps, so far as I’ve noted, are shiny-shaven. As you can see, particularly in the first pic, this one has no end of fuzz. I can find no species that fits the description. The European Hornet is a little hairy, but a lot more wasp-coloured. A mutant? Diseased? I have no idea.

I hope someone does. 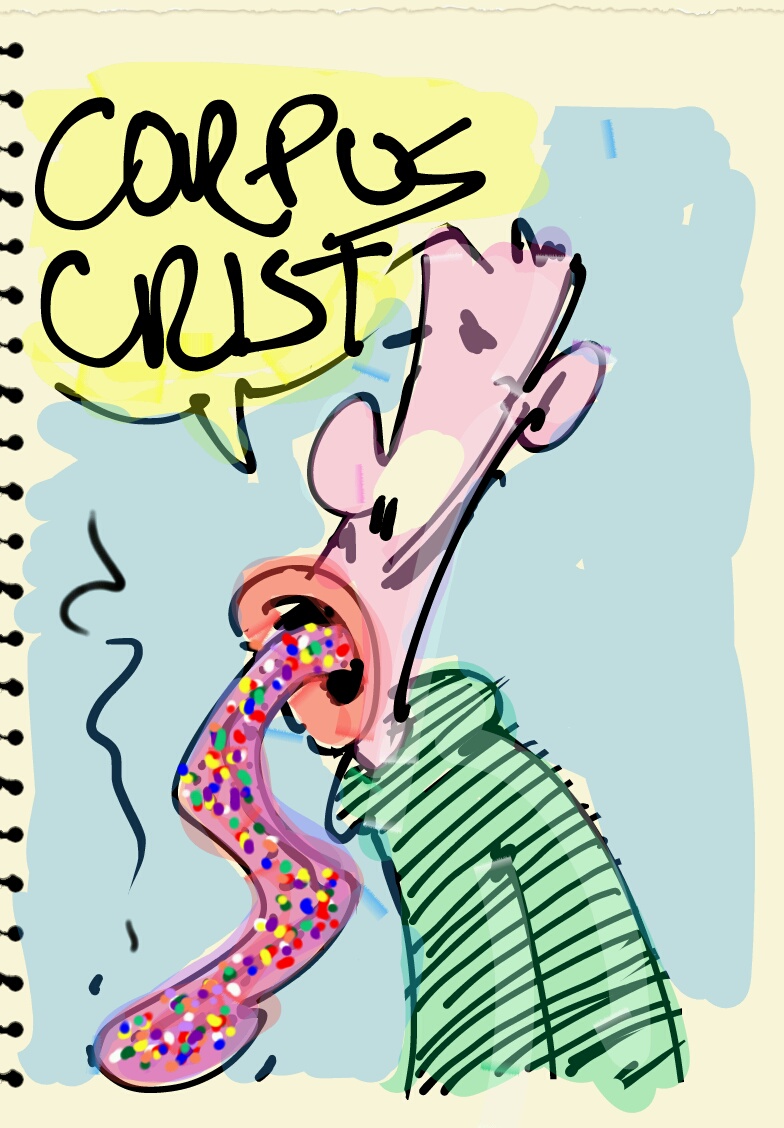 Urgh. Suffering from advanced brain death, and a mild cold. The weather’s been so heavy recently. Feels like I have feet of clay, and legs of logs.

I’m actually only just very, very slightly sick. But with the weather and a long day on the conveyor belt of other people’s problems, looking for small pieces of necessary equipment, checking every place twice and then checking them twice again in case I’d only checked once, up in the attic inhaling the dust and soot and cutting myself on the cheesewire threads of cellar spiders, it has built up into general malaise.

What about those cellar spiders? These are the beasties that are all legs and almost no body –  one of the three unrelated species that get called Daddy Longlegs, though I think that’s mostly in America. (In Ireland it seems to be the crane fly that gets to use the sobriquet most commonly, in Britain I think probably the harvestman.) It weaves – if weaves is the word – messy, patternless webs of quite amazingly tough and elastic (but thankfully not very sticky) threads which it seems to use less as trap than as a defence mechanism. Bother one, and it will set itself vibrating in its elastic cradle so rapidly that it becomes a blur. Quite disturbing the first time you encounter it.

Its victims include other spiders, so if you live in a place where many species are dangerous – or where people just think they are, as in much of the US – it’s often thought to be poisonous itself, a sort of serious spider badass. It’s not; it’s entirely safe to pick them up and throw them out – if you can catch them. It’s been claimed that they’re capable of a small, essentially harmless bite, but I’ve handled them without feeling anything.

I do suspect them though of endangering the cute little house spider, which they seem to be ousting as most common indoor species. I would swear the cellar spider was rare in this country even twenty years ago. They need a place that doesn’t get too cold in winter, apparently because they’re subtropical in origin and only spread as humans thoughtfully built them nice warm shelters. (Who knows, perhaps this is our true purpose in the ecosystem.) Is it climate change, or have I simply never lived in a house warm enough until now?

It’s being a weird summer for insects too. I saw my first wasp today! Seriously, first I’d seen all year. No bad thing in some ways, but a little worrying. You think of wasps as a tough species, but this summer seems to have been too harsh even for them.

On the other hand, it’s being an amazing year for dragonflies, a species I once thought of as endangered. Now the beautiful monsters are back, bigger and more iridescent than ever, and it’s the all-too-common wasps that seems to be waning.

Hey, maybe dragonflies are eating the wasps. That would be cool.