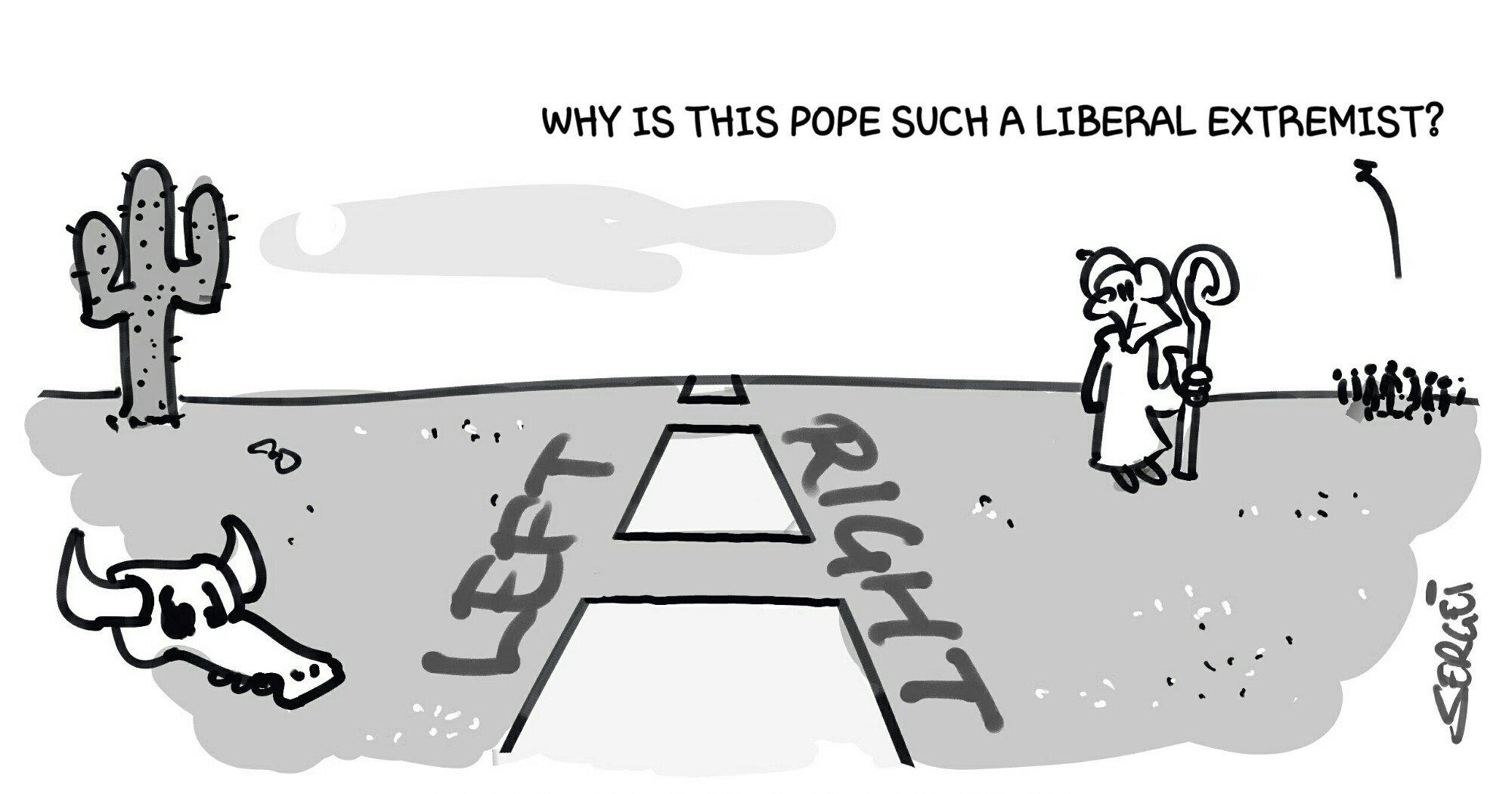 It’s weird how the Pope was fêted in the US almost as a left-wing radical, just because he doesn’t wholly approve of unbridled greed. People, he’s the Pope. He’s head of the vast thing, that does all the things.

I’m lost for words here. The one I did for the current Phoenix probably says it all. 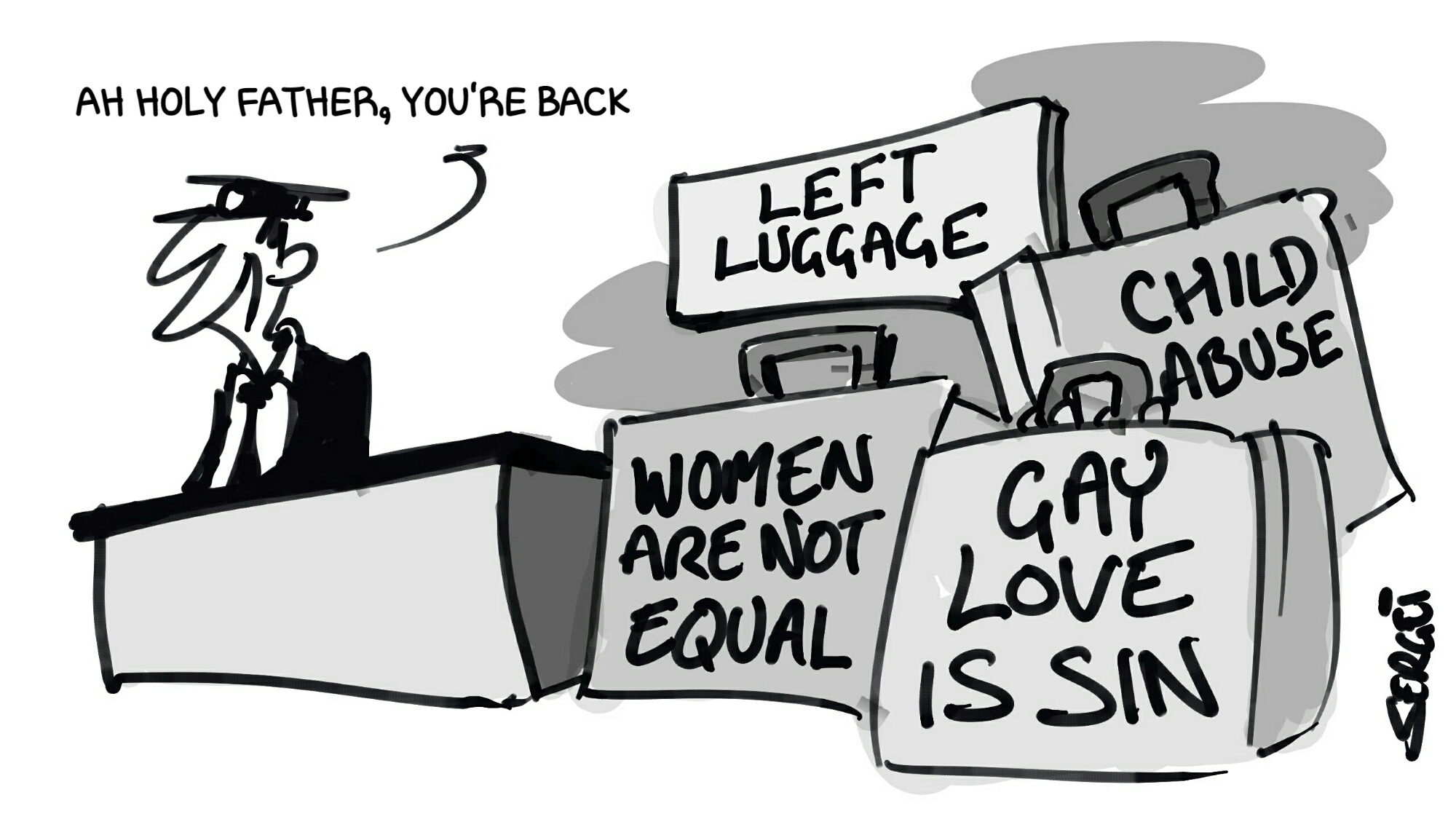 So what was the Vatican’s response to Ireland’s historic vote for marriage equality?

Slightly muted, somewhat bitter, and more than a little enlightening.

The Pope himself said nothing publically, presumably not to appear fallible. It was left to close deputy Cardinal Pietro Parolin to make this odd but revealing pronouncement:

The Irish vote, he declared, was a “defeat for humanity”.

The decision of a majority to accept and cherish a minority? To me, that is the triumph of all that is best about people, humanity at its absolute finest. It seems that when the Catholic Church uses the word “humanity” it means something quite different.

A 2,000 year old all-male global institution. For sure that’s an organism of a sort, able to preserve and replicate itself successfully. But its goals and its needs, its triumphs and defeats, are not humanity’s. Life, but not as we know it.

Not a term you hear much these days, fornication. For those of you without the benefit of a Catholic education, fornication is the sin of having sex with someone who isn’t your spouse, a puzzling concept in a day and age when few still believe in sex after marriage.

Michelle Mulherin’s (FG) use of the word in a Dáil debate was amusing, but rather distracted from the issue. This being that the courts have found – years ago – that there are circumstances where a woman has a right to an abortion, but the legislature has never overturned existing or created new law to decriminalise it in those circumstances. It’s such a touchy subject that even an ostensibly woman-friendly party like Labour are avoiding it. (This attempt to correct the situation was sponsored by the tiny Socialist party.)

The basic problem is that the issue is not open to reasoned debate – not when a significant proportion of people (probably a minority now, but still a blocking one) stick with the Pope‘s opinion that human life and its concomitant rights begin at the moment of conception. It’s an extremist position, but it effectively closes down the subject. If abortion is murder, how can you even discuss it?

Others do take different stances. That humanity begins at birth, or that there is some stage of development after which a foetus may be said to be human. The latter though is really passing the buck. There is no medical definition of humanity, the start of human life – conception, birth, some point in between – is a matter of how you define life and how you define humanity, a philosophical question with no definitive answer in science, or indeed in scripture.

This being the case, can we not accept that the only relevant opinion here is that of the woman?

You know this wouldn’t be a bad lecture or TED talk, on the necessity of critical thinking. Dammit, it would make a pretty timely address to the United Nations too. Imagine that – a guy with a piano on the floor of the General Assembly.

But it’s none of these. It’s a comedy show – and a brilliant one.

Tim Minchin is a stand-up. It’s just that most of his routines rhyme and scan and are set to great music. It’s almost excessive in its wonderfulness, yet unlike other ostensibly clever comedians we could name Ricky Gervais, it’s not about him being clever. It’s about reality, honesty, and where we fail at them.

But it is clever. What did we do before we had comedy this smart? We were laughing at mud and funny-shaped pebbles. More than clever though, it is wise. Insightful, humanistic, brave stuff that takes a stand against a world full of willful ignorance. Is there an audience for that? Well 400 people in a venue in Ireland just gleefully applauded a song with the chorus “F*** the m*********ing Pope”.

And that’s two nights in a row, downstairs in the Radisson as part of the Bulmers Pear Galway Comedy Festival. Which took me aback. I thought I was into something a little bit obscure here, yet even way out west, in a country where Minchin has, to my knowledge, never even been on terrestrial TV, an enthusiastic capacity crowd gave him a standing ovation.

There’s hope for our species yet.

For his criticism of the Pope, one priest has likened Ireland’s prime minister to Adolf Hitler. Another called Justice Minister Alan Shatter a “Jewish non-practising atheist”

When your opponents call you Hitler and a Jew, you must be doing something right.

In the wake of the Catholic hierarchy treating child protection rules as something that happens to other people, government has little option but to put them on a statutory basis, complete with the sanction of jail terms for those who “withhold information relating to sexual abuse or other serious offences against a child or vulnerable adult”. There seems no other way – indeed one wonders how that isn’t the law already.

Those who would defend the indefensible however want to characterise this as requiring priests to break the ‘seal of confession’, the vow to treat anything revealed in the confessional in absolute confidence. This is mendacious. I’ve said this before but it bears repeating – no one is going to get a conviction based on a private conversation between two people. Even in the unlikely scenario of a convicted child abuser accusing his confessor of failing to report him, his testimony would still be uncorroborated.

What about a scenario where a priest hears a child “confess” that someone has been interfering with them? Even if the priests still considers that information privileged, surely he would take whatever action he could to ascertain for himself, outside the confessional, whether the child really was in any danger, would report any reasonable suspicions to the relevant agencies, and would encourage the child to do so too.

And surely he would consider himself morally compelled to do that whether this law was in force or not.

But the law is not aimed at confessors. It is aimed at stopping the Catholic hierarchy concealing information they have about abusing priests, information that they are acting on themselves. Which – unless they themselves are breaking the seal – does not come from confessions, but usually from the complaints of victims or their parents. People who protest that the law will threaten the sacrament of confession are merely out to defend the autocracy of that hierarchy. 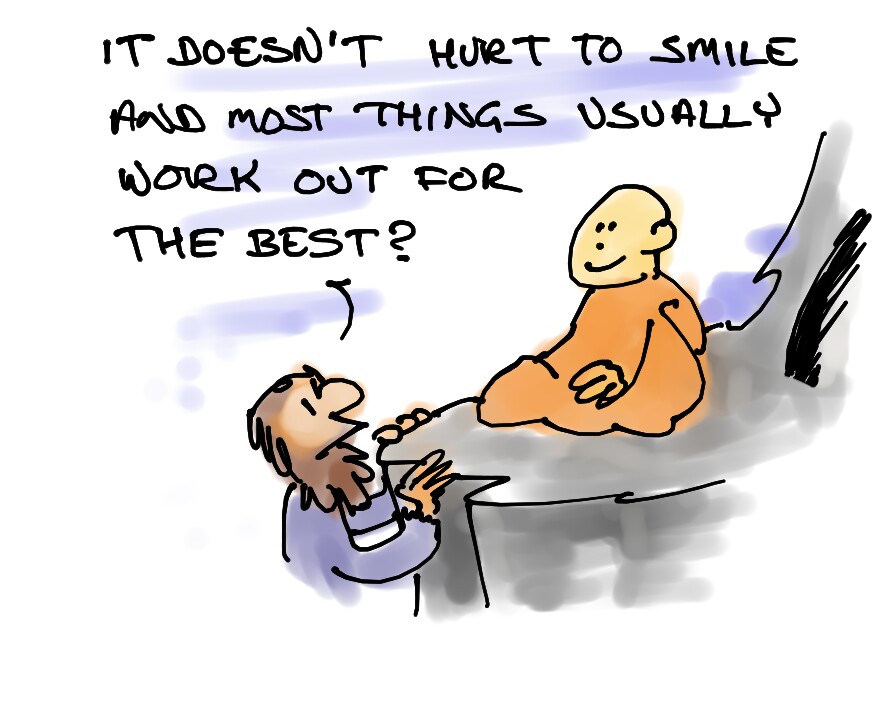 It’s shaping up to be a bad week all round for major religions, with the US letting its diplomatic mission be used to serve court papers on the Pope. These allege that he was involved in a conspiracy of silence over child abuse, which I think we might fairly say is about as self-evident as his Catholicism. He’ll never stand trial for it of course, but as empty gestures go it’s an impressive one.

It’s been better I suppose for the world’s second most famous head of a religion, the Dalai Lama. (Some describe Buddhism as a philosophy rather than a religion, but anything that claims you can survive death fits my definition.) Then again, is the Dalai Lama really a Buddhist leader? During his visit to Ireland we’ve had everyone from nuns to people who describe themselves as non-religious out to greet him. He is perhaps the figurehead of that fastest-growing denomination in modern society, the Not Into Organised Religion But A Spiritual Sort Of Person; people who want to believe that there is meaning to life, but are reluctant to speculate about what exactly it might be.

Of course, there is nothing vague about Buddhism. Like any religion it presents a blueprint for what it considers to be a well-ordered society. It is a set of rules, and indeed one with great emphasis on discipline. But the 14th DL is himself a likeable, diplomatic type with a reluctance to give offence, so he comes across as preaching little more than niceness. He’s become the Pope of Vague.

He does seem to be a nice person, it is true. And as nice people go, probably the one most likely to spark war between India and China.