So last night many of you will have seen the biggest moon you ever did see. The “Supermoon” – or perigee-syzygy, to give it its even sillier proper name. Hope you enjoyed it. Despite being sandwiched between lovely days, last night was clouded and rainy here. Sadly I realize that I may not live to see a moon so imperceptibly larger than average as that one. “Almost visibly bigger!” as a FOAF said.

It might have gone largely unremarked, if someone hadn’t speculated that it caused the earthquake and tsunami. This was probably inevitable considering that tsunamis used to be called tidal waves, back when we didn’t know what really caused them. But this is actually quite an interesting idea.

It would be easy to dismiss it with ridicule, what with there being one or two salient differences between liquid water and solid rock. Though it’s enough to leave a very noticeable gap between high and low tide, all the moon’s gravity is really doing is changing the shape of the layer of water that lies on the Earth by the teeniest, tiniest fraction of an iota of a scintilla of a percentage. It’s really a very weak influence. 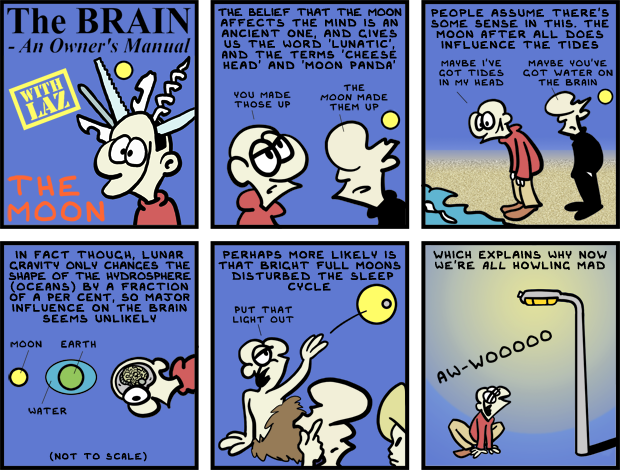 But then again – we know the Earth’s crust is a highly complex, unstable system, and we have heard of  the “butterfly effect“, which suggests that small inputs to such systems can lead to vast, unpredictable and – yes – even catastrophic outcomes. So there might be something in it?

Might be. Isn’t though. There’s the small detail that the tsunami happened over a week ago, while the moon was still at a perfectly ordinary distance. Sort of kills the theory, that detail.

The trickier question to answer though is why there isn’t anything in the theory. It doesn’t sound unreasonable. In fact it’s a fine example of an excellent theory that just doesn’t happen to be right. Excellent, because it makes a clear, easily-tested prediction: If the moon’s orbit had any appreciable effect on plate tectonics, there would be a rhythmic pattern to earthquakes. And there isn’t.

If there were, they wouldn’t be so bloody hard to predict.

But why isn’t there…? Well I don’t know. What are asking me for, I’m not a plate tec… nician. But my guess would be that with all that roiling molten rock beneath our feet, with the huge energies of continents weighing billions of tonnes grinding against one another, with the titanic rattling and farting of volcanoes, the moon’s influence is just lost in the mix, drowned by countless stronger forces pushing unpredictably in other directions. Real, yes. But insignificant.

So dwell on that, the next time you stare up into the beautiful night sky. Space may be vast and cold and silent, but hey, you’re standing on a fucking bomb.

5 replies on “Yes It’s Only A Supermoon”

Standing on a bomb. Nice comforting thought that… Thanks!

All right, not really a bomb. More a plutonic crucible of incandescent iron and stone.

All right, not really a bomb. More a plutonic crucible of incandescent iron and stone.